As part of LCC’s beat the Thief campaign, RCC has obtained, via a Freedom of Information request, information on bicycle theft within the Borough of Richmond from 2007. The numbers are telling – in that period a total of 2,296 bikes were stolen. We’ve uploaded both the FoI response from the Met and an analysis of the numbers so you can look at them for yourself, but here are some key take aways:

The chart below shows where the thefts have occurred in 2010 (click on the chart to see a larger version). 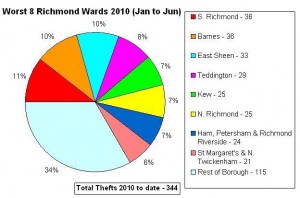 We asked the police in Richmond what they were doing to tackle cycle theft in the Borough and they provided the following statement:

“Richmond upon Thames SNT’s regularly perform cycle marking at a variety of community events and locations and currently over 8000 bikes have been marked . The SNT also plan their patrols around the locations of reported crime and indeed in June, significant arrests were made of two individuals which are suspected of being involved in a number of bicycle thefts . The SNT crime priorities are decided by the community and reflect the crime concerns that community has . At the beginning of August 2010 two wards , Ham and North Richmond have theft of pedal cycle as a priority.”

Given the low recovery rate, and the lack of interest in some of the wards to tackling this problem (have a look at the minutes from the Safer Network Teams meetings to see how rarely cycle theft is mentioned), the best approach is prevention, with good guidance from LCC’s Beat the Thief campaign, including this video on how to lock you bike up correctly.

If your bike is stolen, it is most likely to end up on eBay or Gumtree – a London cyclist recently created a website which scours both these sites and you may be able to spot your bike using it – http://bikeshd.co.uk/. A quick look at the site illustrates how many of the bikes are blantantly stolen (limited information on the bike for sale, use of pictures from catalogues rather than actual photos of the bike for sale) and LCC is working to try and crack down on this practice.

We shall report back soon on the the audit of cycle parking at railway stations within the Borough, but in the interim don’t hesitate to contact on this or any cycling related concerns in the Borough.