What the Cycling Strategy Should Say…

At the recent Environment, Sustainability and Community Overview and Scrutiny Committee councillors challenged RCC representatives to identify where we would like to see improvements in the borough’s cycling facilities.  In response we have provided this document to council officers to consider as part of their mini holland bid development. Our key points are summarised below.

We believe that the provision of safe direct and convenient routes is key to getting new people cycling. The borough benefits from many scenic leisure routes; but routes to schools, shops and town centre areas are typically blighted by busy roads with little protection for cyclists; and these create conditions which are intimidating and deter people from making journeys by bike.

The creation of a high quality cycle network that spans the whole borough should be a key aim of the both the borough cycling strategy and the Mini-Holland bid.

Previous attempts to create a network, under the London Cycle Network scheme; were poorly implemented and suffer from: 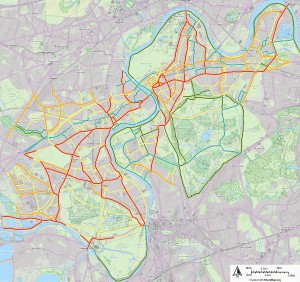 This map shows the key cycling routes in the borough; graded according to the routes “subjective safety” and convenience. By “subjective safety” we mean the “perceived safety” i.e. does the route feel safe to cycle on? Would travelling this route with a competent 10 year old child or other vulnerable cyclist be a stressful or pleasant experience? This map gives an indicator of the user experience of travelling the many routes around the borough.

(You can also explore the map in Google Earth here)

One of the primary issues for the local cyclists is that that many of the key routes around the borough rely upon use of the main road network. In this version of the same map we have removed the hostile RED routes from the map.  This highlights the disjointed nature of the “quiet” network today.

Ideally, people should be able to cycle throughout the borough on routes graded as “blue”. To achieve this:

The map also highlights the following key gaps in the network, where there is currently no alternative but to use a busy main road. These gaps should be prioritised as part of the development of well lit and surfaced routes with adequate separation from busy traffic:

As a longer term ambition; a bridge alongside the district line from Kew (the service road alongside the national archives) to Chiswick (Wellesley Rd next to Gunnersbury station) would take cyclists away from the major road junctions north of Kew Bridge and route them directly to shops and workplaces in Chiswick and Acton.

The map below shows – in purple – what a basic network of quiet routes could look like; incorporating the “mini holland” railway-side tracks concept; upgrades to the A316; and addressing the points listed above.

Have a zoom around this map in Google Earth and let us know what you think.

And finally….Embed Cycle Infrastructure Planning Into the Mainstream.

The proposals shown here are intended as a beginning of a local cycle network for Richmond – there is much more to do beyond the ideas discussed here. Aside from the mini Holland opportunity, the LB Richmond Upon Thames should build a long-term plan for sustained investment in the cycling infrastructure across the borough to build this network – as part of business as usual. Whenever roads are to be re-surfaced; reworked or there is cash to spare at the end of the year; improvements to the network should be addressed.