We ask the tricky questions so you don’t have to. (No.2)

Upper Richmond Road West has been on the receiving end of an awful lot of tarmac in the last couple of weeks, and is now beautifully finished.

Which is nice, but there was a big consultation last year, and RCC took the opportunity to look at some of the issues with that stretch of road. This is a busy road, which serves five local schools, as well as a number of other local amenities, and it was being consulted on because it’s an accident blackspot.

So you can imagine that we were very worried that the many responses we’re aware of, which were deeply critical of the proposed plans, have been ignored.

We decided to ask the council what’s going on …

And luckily it turns out that this is all about making use of allocated funds before the new financial year – TfL had provided the cash to resurface, and no decision has apparently been made about the consultation results yet … 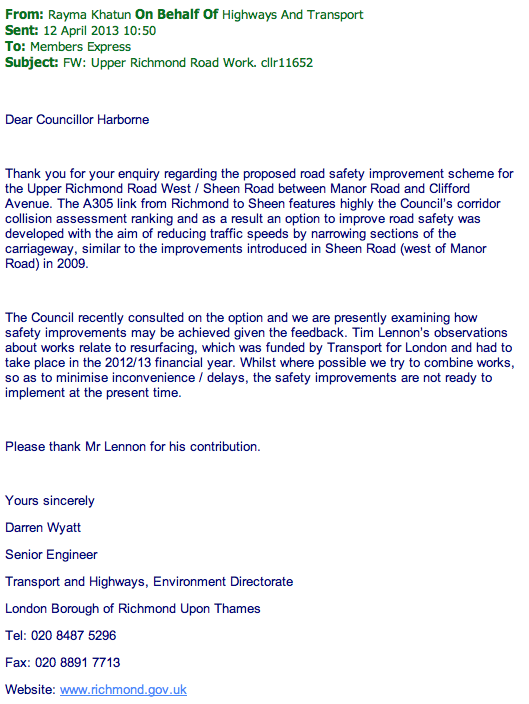 It’s taken quite a while to get what is pretty simple information out of the council, but they have explained the current situation – now we’re just waiting to hear the outcome of the consultation.

A number of people have contacted us about this, so please don’t be shy telling the council that you think this stretch of road needs fixing, and copy us in!