Get Britain Cycling – Bringing it closer to home 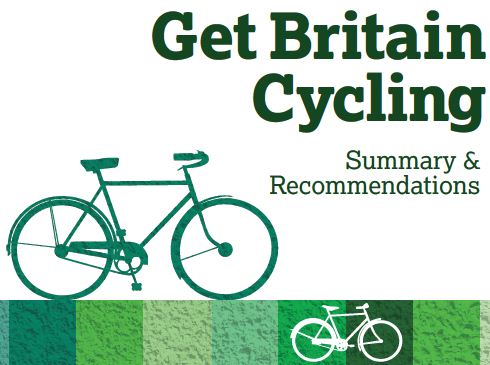 On Wednesday 24 April, the House of Commons inquiry published the Get Britain Cycling report, making 18 bold recommendations to make Britain’s streets safer and more inviting. The journalists at the Times responsible for the Cities Safe for Cycling Campaign launched a petition urging the Prime Minister to implement the report’s recommendations. (read our previous post on The Times campaign)

Locally the findings of the report are very relevant, as anyone who has followed the challenges with the Twickenham town centre changes or our current campaign for cycling to school will have seen.

We’re asking everyone to take 2 minutes to sign the petition but more importantly, ask your family and friends to sign as well. This isn’t just for those of us who cycle already – it’s for everyone out there who would like to cycle, to the shops, to their place of work, to school with their kids, but who don’t feel our current streets and roads make it safe to do so.

The petition can be found here – http://epetitions.direct.gov.uk/petitions/49196

And you can read the full report online (PDF 2.3MB)

We also want to take the campaign local. Things are improving, we’ve been involved in meetings to make improvements to the Twickenham town centre change but there is lots of potential to really make our borough a much nicer place to live and cycle in.

We want you to write to your councillor and ask for their support to make our streets safer as part of the Get Britain Cycling report findings – you can find a list of local councillors here (there is even a nifty tool to find out who represents you). It doesn’t need to be long, just highlight the points of the Get Britain Cycling report and how that relates to the borough..

We will also be bringing that message to the council, but it is individual contact that makes the difference. Let us know about what response you get and we’ll share it here.

Articles on The Get Britain Cycling report

“The way we travel now is killing us. We’re the fattest nation in Western Europe — 30 per cent of our children are overweight or obese and 30,000 people a year are dying from obesity-related illnesses.” – Chris Boardman writes in The Times

“Each and every concerned cyclist, would-be bike rider, and proud parent who dreams of a better country for their children has to today step up to be the change they want to see.” – Mark, from ibikelondon on the need for change

“The money is there, the will is there to change things and there is tonnes of space to get this right. But the direction of travel is backwards.” – Danny, from Cyclists in the City on the need for real change at the local council level