“There have been some crazy by-laws in place from the year dot stopping cycling from taking place. This should enable local people to scrap laws stopping people from getting on their bikes.”

“Everyone is interested in looking after themselves and their health, as well as the environment, and cycling succeeds on both of those fronts.”

As you would expect we don’t just “agree”, we “strongly agree” with the Minister.  The article said “Hundreds of miles of cycle routes could be created across England following a move to make it easier for councils to scrap outdated local laws.” Why? Because councils won’t need permission from Central Government to abolish byelaws, part of the initiative to devolve decision-making better known as “localism”.

So, will Richmond Council be rushing to “scrap laws stopping people from getting on their bikes“? Click here to see the wide range of current byelaws on their website.

“There is a general feeling…that any general abolition of ‘NO CYCLING’ byelaws may not be desirable, but a review of well-used paths or paths where problems have emerged may be more appropriate.”

Ok, so on a case by case basis, we can live with that.

“There are a number of public rights of way footpaths, many in the old Borough of Twickenham, which are subject to byelaws but they remain unenforceable as ‘no-cycling’ signs warning of the offence have not been erected at each end of the path.”

“The preferred course could be to undertake an appraisal of the footpaths where cycling could co-exist satisfactorily with pedestrians.  This would be done in accordance with design guidance and consideration of path widths, pedestrian flows and sight-lines etc.  However, this would not be a remedy to allow cycling, as footpaths only provide for a right of way on foot and ‘conversion’ using the Cycle Tracks Act 1984 would still be necessary to legally allow cycling.”

I’m beginning to feel the weight [wait?] of bureaucracy bearing down.  We mentioned Cycle Track Orders back in February when they appeared in the Programme of Works 2011/12 in relation to the Thames Towpath

And, of course, it goes without saying that:

“The above would all be subject to funding being identified and the approval of Cllr Harrison, Cabinet Member for Highways and Streetscene & Cllr Virginia Morris, Strategic Cabinet Member for Environment, Planning, Parks and Highways.”

But, there’s always a silver lining:

“The Parks Department do not have the resources, or desire, to enforce ‘NO CYCLING’ byelaws in parks. It is acknowledged that many people cycle in the Borough’s parks and in high flow areas shared use “pedestrian priority” signs have been erected to try and regulate behaviour.” 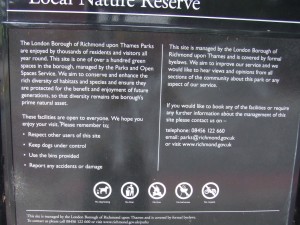 We’ve asked to discuss the next steps at the Cycling Liaison Group meeting on 11th July [NB: this meeting has been postponed] and agree:

Let’s find out how bureaucratic this is and how long it takes by making a list of suitable paths: e-mail campaign@richmondlcc.co.uk with your suggestions.

A recent question about the stands removed from outside Dickens and Jones in George Street, Richmond, received a very prompt reply from the Traffic Management and Projects Manager, Highways and Transport, Environment Directorate, with this good news:

“Now that the paving works are nearing completion we will be shortly installing 16 new cycle stands (provision for 32 bicycles) in the area near to House of Fraser.  We expect this work to be carried out in approximately 2-3 weeks“.

That’s early July if you’re counting and we’ll check: not difficult as our monthly meeting is in the pub opposite.

This is what it looks like there at the moment: 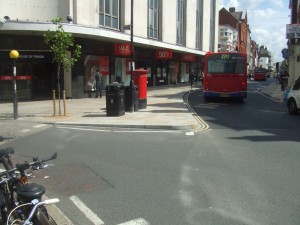