Rides for Everyone – Sunday 26th June

Beating the Bounds is an ancient custom where the local community would walk all around the parish, to witness and reinforce its boundaries in days before maps, and to pray for blessings on the land contained within them.

This is a ride in two parts: like the borough itself it will be split by the river. The morning ride takes in the western part of the borough from Twickenham via Crane Park to Hampton Court and back along the Thames. The afternoon ride takes in Ham, Richmond Park, Barnes and Kew and is mostly off-road, so is ideally suited to beginners, families and those less confident on the road. Shorter routes back to Richmond will be available during the afternoon if anyone wants to join us for a smaller loop.

Six of us set off at the unheard of time of 9.00 on a warm Sunday Morning. Bryony led us up the Crane where if forms our northern boundary and down it where it is the southern one. We saw a swan’s nest as we crossed the Longford River in Hampton and then ventured across the Thames by ferry. After coffee in Hampton Court tiltyard we followed the Thames back to Richmond. 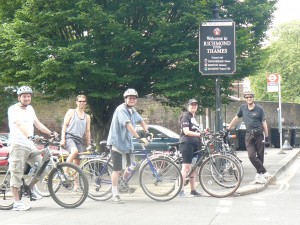 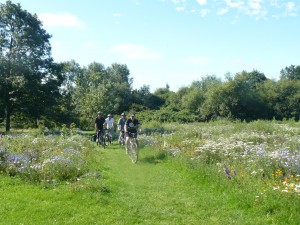 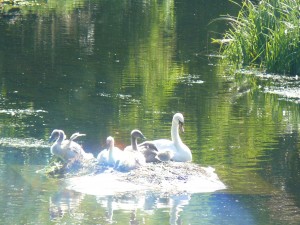 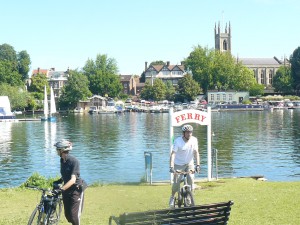 In the afternoon four of us cycled south past Petersham Meadow and Ham Lands before following the Kingston boundary into Richmond Park. A short excursion outside Kingston Gate found an ice-cream van with a wondrous selection of flavours. Thus refreshed we tacked the steep climb and exciting descent to Beverly Brook which we followed to the Thames. The Thames Path back to Richmond was pleasantly shaded.  Pity about the bone-shaking surface past Kew.

The ride was part of Bryony Evens challenge to ride all the London Borough boundaries: http://livingadventurously.wordpress.com/