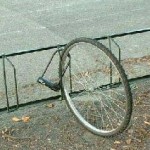 Following the earlier post about the new cycle parking at Richmond Railway Station, we can report back that after our feedback South West Trains visited the station to review the parking and recognised that additional signage is required. The council are also looking at the opportunity to provide additional signage to complement that provided by South West Trains. We were also told that the cycle parking is covered by CCTV which is monitored on a 24 hour basis from Waterloo.

To coincide with the new cycle parking at Richmond, the members of RCC have undertaken an audit of the other 13 stations in the Borough, which we will report back on next month. In the meantime, the table below lists the stations, with plans of them along with the number of reported bike thefts over the last 9 months, a period which saw a total of 66 bikes reported stolen by BTP. The figures make interesting reading, particularly the disproportionate number stolen from Hampton Wick, in relation to the number of passengers using it.

This review coincides with London Cycle Campaign’s recently launched “Beat the Thief Campaign“, which includes a video and some tips on how to lock your bike as well as an ‘8 Point Beat the Theif Manifesto’.

Closer to home, local Twickenham cyclists are setting up a website called Bike Revolution, which will allow you to register your bike details for free and offer help in finding your bike if it’s stolen. There is also the national Immobilise Website already established. Also in the Borough, several of the Met Police Safer Neighbourhood Police Teams are increasing the priority of countering the theft of cycles. The North Richmond Team have offered to provide free security marking to anyone who contacts them.

There is a lot you can do to reduce the chances of having your bike stolen and increase the chances of having it recovered:
1. Take down the details of your bike (particularly the frame number) and take a photo of it – Bike details template
2. Get it security marked by the Police and register it – Immobilise
3. Choose your locks wisely, lock it up correctly and select where you lock it carefully – Follow LCC’s advice and see Camden’s Bike Security Pamphlet