Dan Deptford’s letter in the Richmond Twickenham Times about Richmond Bridge reminded us that the Thames defines our Borough, that we cycle in the London Borough of Richmond-upon-Thames.  We can cycle along it, with varying challenges, from one end of the Borough to the other, and it’s a glorious ride.  But it also means crossing bridges to get to the other side, even to other parts of our own Borough, in Twickenham and Teddington, and that produces “pinch points”, where different modes of transport are brought together to share the same space.

The highest number, 34, 1/5th of all tickets, [note some out-of-Borough locations in the table] were issued at Hammersmith Bridge.  The 3rd highest number, 18, was at Richmond Bridge.  So, 52 tickets, just under 1/3rd of all those issued, were at two bridges: what does this say about their affect on cycling in the Borough?

From the east, at Hammersmith Bridge (1), we get off to a bad start with no off-road alternative as there’s no cycling on the paths each side of the bridge, enforced by the police as we already know. 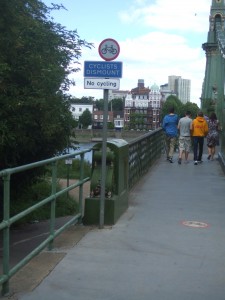 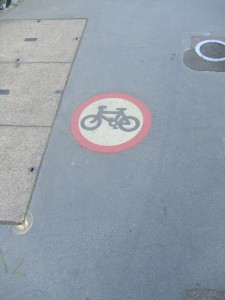 Its historic nature, coinciding with the age of austerity, means we’re not going to see anything like the Millennium additions to Hungerford Bridge.  So, it’s share the road with the traffic, including single deck bus routes 33, 72, 209, 285 and 419, as well as vehicles up to 7.5 tonnes.  The carriageway is narrow and narrowed further by the arch supports.  Managed by Hammersmith and Fulham Council we support the hfcyclists campaign for a 20mph speed limit.  There are also on-going issues on the approach to the bridge we are talking to Richmond Council about.

Moving up river Barnes Rail Bridge (2) is shared with pedestrians and managed by Network Rail who recently installed wheeling channels. 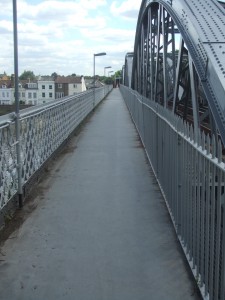 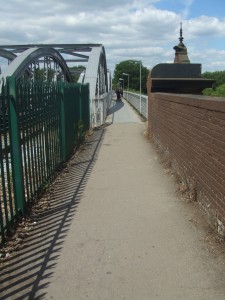 Next up, Chiswick Bridge (3) is managed by Transport for London and as good it gets with shared use on both sides and a ramp down to the river on the south east side 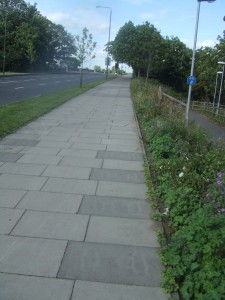 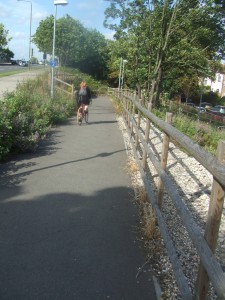 Also managed by TfL, signage on the approach to Kew Road Bridge (5) indicates shared use like Chiswick 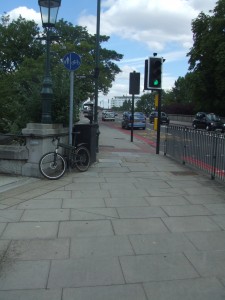 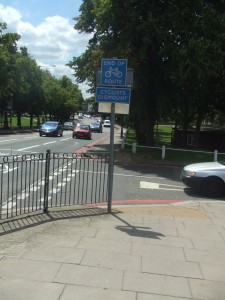 Making sure there is a safe and convenient connection to the planned Cycle Superhighway 9 [Hounslow to Kensington] on the north side is a new priority for us with TfL. 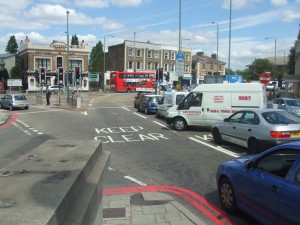 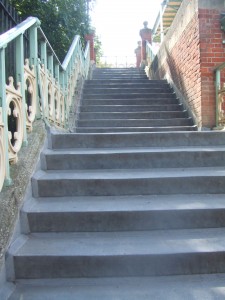 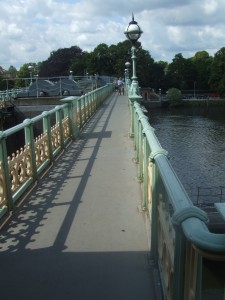 Twickenham Bridge (7) like Chiswick and Kew managed by TfL, has a cycle path on both sides with access by The Avenue to the Twickenham side of the river but steps only on the Richmond side 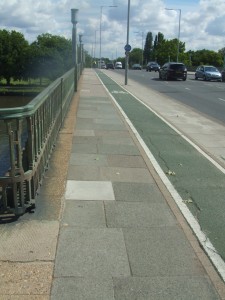 Teddington Lock (10), like Richmond Lock, managed by the PLA, with no cycling on either part of the double bridge, but ramps on both sides 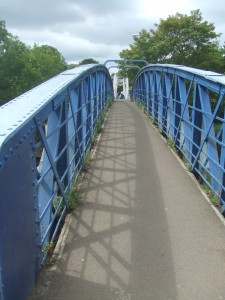 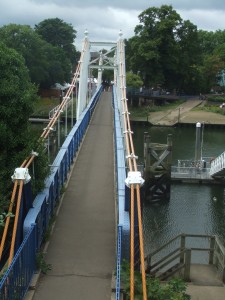 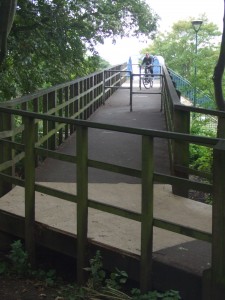 Like Hammersmith, history and austerity makes any change here unlikely.

Kingston Bridge (11), managed by the Royal Borough of Kingston upon Thames, has cycle lanes on both sides 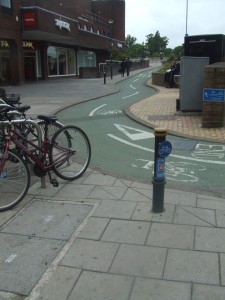 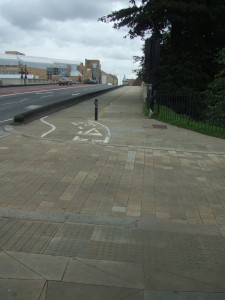 We’re still waiting for a safe and convenient connection at Church Grove to Bushy Park and the off-road cycle path in Hampton Court Road.

We’ve talked about Hampton Court Bridge (13) before, saying the shared use path on the up river, Molesey, side only doesn’t meet the needs of people cycle commuting north-south rather than east-west along National Cycle Network 4, the Thames Valley route 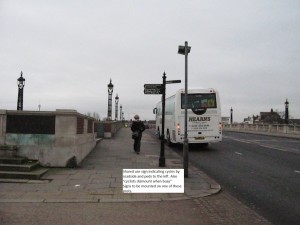 Action is complicated by agreement in April 1989 on the responsibilities of Richmond Council and Surrey County Council [SCC]:

Changes to routes across the Bridge is likely to need approval from both councils.

Given the river’s length and the distances between some bridges it’s not surprising imaginative people have suggested additional ones, including Radnor Gardens in Twickenham and at Hampton.  The enthusiasm behind these proposals, and the loveliness of their designs, are to be cherished in these harsh economic times, a reminder of how very different the world was running up to the Millennium, when a new bridge was regarded as THE statement of an optimistic future.

E-mail campaign@richmondlcc.co.uk with your thoughts on Thames bridges in Richmond Borough.