We now know more about the proposed secure cycle parking at the station following publication of the Council’s report to the Cabinet Member for Highways and Street Scene [click here to read it]:

“It is proposed that 3 existing shelters on platform 1, with parking for up to 30 bicycles, will be enclosed with fencing to form a secure restricted access compound. This will be accessed by a security gate controlled by a swipe card which is provided by SWT upon payment of a returnable deposit.” [para 4.7]

This is also interesting:

“The Transport for London (TfL) Cycle Security Plan highlights that stations in Outer London suffer from a disproportionate level of cycle theft. The Borough has 4 stations in the top 25 stations (in Greater London) suffering the highest levels of cycle theft (2009/10)” [para 4.4]

We responded to the public consultation on this at the end of last year and we know others did as well. We highlighted that the lane, at 1.3m, did not meet the London Cycle Design Standards which state the minimum should be 1.5m, preferably 2m and that it did nothing to deal with challenges of crossing Richmond Bridge – You can read our submission to the consultation here.

Click here to read the Council’s report to the Cabinet Member for Highways and Street Scene to see which comments made it into print and what the Council Officer has said about them [Annex B]. On the subject of narrow cycle lanes, their comment was telling on their attitudes to cyclists:

“There are many examples where advisory cycle lanes of less than 1.50 metres provide a safe and convenient facility for cyclists, particularly when vehicular traffic is stationary or slow moving” (item h in this report). Have a look at this video by a local cyclist and see if you think the lanes are safe and convenient:

Before we clear the decks to support London Cycling Campaign’s “Love London, Go Dutch” here’s a round-up of what we know is happening locally, listed under the Veloteer Patches we talked about in October if you’re interested in a particular area of the Borough.

In a series of posts early last year we talked about the proposed footbridge over the railway in Manor Road, first in January when the planning application was refused, then later in the month when the design competition was announced and again in March when we talked about the challenge of “severance” in the Borough. The winning design has been posted on the constituency MP’s website here with the opportunity to comment on it here before Network Rail submit another planning application to the Council. We’ll repeat our previous request for wheeling channels to be installed so cyclists can get ahead of the queue of motor vehicle traffic to reduce the risk of collision. 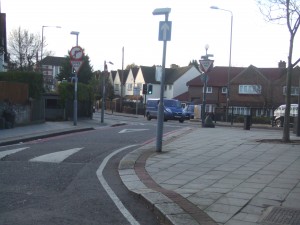 While we’re talking about “severance” and the particular challenge of crossing railway lines in the Borough, TfL have just published the Traffic Order for the proposed work in Clifford Avenue they consulted on at the end of last year.  Click here to read their proposal to move the toucan, among other things, here for our written response to the consultation and here for their reply.  We’ve written back to ask them about this paragraph:

Clifford Avenue is not wide enough to allow for the provision of new mandatory cycle lanes in either direction alongside general traffic lanes.  TfL is intending to implement a signing project advising cyclists travelling north or south of suitable parallel roads to travel either in a northbound or southbound direction.”

Can you confirm the “signing project” referred to is the same scheme listed in the TLRN Cycling Programme for London Borough Richmond upon Thames as “A205 Rocks Lane to Kew signage review (E2E) Provision of route signing along whole route and across route adjacent to A205 corridor to encourage alternatives: signing to expand on to Borough Roads to link troupes and provide consistent signing”?  As you will know already, one of the greatest challenges for traffic travelling north south in the Barnes and Mortlake area is severance caused by the railway, especially in Barnes where two lines have to be crossed at Vine Road.  As a consequence pinch points are created at the limited number of crossings that exist, where vulnerable road users, including people who cycle, are required to share space on the carriageway with high volumes of motor vehicle traffic, including heavy goods vehicles in Clifford Avenue as part of the South Circular.  The difficulties here have been considered before as the TLRN Cycling Programme for London Borough Richmond upon Thames referred to above notes “investigated the possibility of shared use footway across the bridge, however this was not feasible.”  The “parallel roads to travel either in a northbound or southbound direction” we know that cross the railway are B351 Sheen Road and B353 Manor Road neither of which have existing cycle facilities and both of which are surface crossings that create queues of motor vehicle traffic.  Please can you tell us more about the proposed route of the “signing project”?

Click here for the posting updated on 12thFebruary.  We’re waiting on a reply from the Council about why they preferred zebras to toucans but in the meantime the report submitted to the Cabinet Member says “Placing signalised crossings on all arms of the roundabout without signalising the junction would undermine the operation of the junction. This would severely impact on traffic flows and could lead to increased personal injury collisions.” 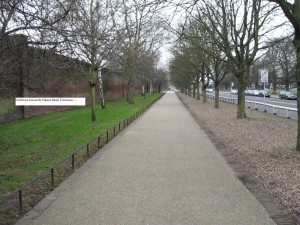 While trying to get someone to agree to consider installing wheeling channels as part of the planned work on the footbridge linking the two platforms [we’re awaiting a reply from Network Rail] South West Trains told us that secure cycle parking is to be installed.  This follows recent completion of the cage at Mortlake and the established one at Twickenham, shown below: 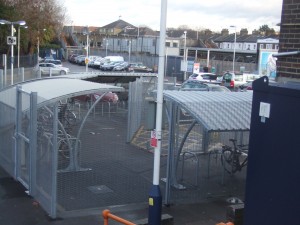 We’re waiting for the size and location at Teddington and how to use Mortlake but presume they’ll follow Twickenham which we’ve been told “is now secure card access parking for around 40 bikes for £25 deposit for the card. I use it and am very impressed, mainly because I’m always assured of a space and it has, or appears to have, integrated CCTV which makes it feel more secure.”

Click here for the posting updated on 12th February.  The Action Plan contains some opportunities, like the River Crane shared use path and the “detailed traffic scheme” we’re trying to influence the content of, but also some threats, the most serious of which is the proposal to build a 3, or 4, storey car park in Station Yard. We strongly opposed this in our response because of the detrimental impact on the east west route of London Cycle Network 172 along St Mary’s Grove and Station Road, the likely congestion in London Road and increased vehicle traffic in the residential roads between Station Road and Heath Road.

We made some specific comments about the station in our written response to the public consultation on the Area Action Plan earlier this month but it was made clear the station was subject of a separate consultation [click here] This should run from 27th January to 9th March but shows as “Planned” rather than “Current“, presumably because the scheme approved by the Council has been referred to the Mayor.  Our concerns remain that people who cycle to the station should be able to arrive and leave safely and conveniently with sufficient secure cycle parking.

We listed the problem of people routinely breaking the law by driving in this lane in our response to the Area Action Plan.  By coincidence someone who cycles through Twickenham and was nearly knocked off their bike by a car in the lane has written to the Council asking what they’re going to do about it: we await their reply.

The most recent Council Digest publishes the Agenda for the next Cabinet meeting on 23rd February with interesting reports on the extension of the Free Short Stay (30 Minutes) Parking Bays in Town Centres, Programme of Highway Works for the next financial year 2012/13 and Moving Traffic Offences, something we asked about at the Cycling Liaison Group meeting in October last year.

E-mail your comments to campaign@richmondlcc.co.uk