Twickenham Consultation – The Next Steps 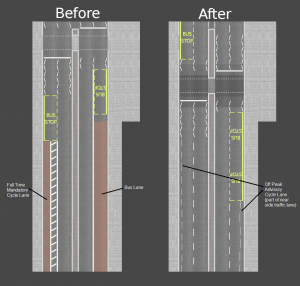 There was a big a big attendance of cyclists at Thursday’s Cycle Liaison Group meeting with Richmond council, showing the strength of feeling about the changes to Twickenham town centre. London Cycling Campaign covered the subject on their website. Many told us they had never taken part in a meeting like this before, but felt compelled to come along to make their voice heard. A big thank you them and to the many others who couldn’t but emailed their support and a thank you to Richmond council for adding the subject to the agenda.

The meeting can be split into two parts – the original agenda (in which we learnt a lot about bat friendly lighting) and the bit that everyone went to hear about. Local cyclist Tim Lennon wrote up very effectively about both parts.

The council has stated that it is listening to our concerns, which is welcome to hear, and that the changes are not yet a done deal, though we are concerned about previous information that they would be ratified at the Council Cabinet meeting on 18th October. They now say that they are going to install cycle lanes throughout Twickenham town centre, but these still appear to be the advisory, off peak only, cycle lanes, which will form part of the nearside motor lane, rather than an extra width. We still feel strongly that this is inadequate, given at peak times, when parents are cycling to school with their kids or people are cycling to work, the most protection is needed. In the words of one of the attendees, ‘they are as useful as a chocolate teapot’ but it does show they now realise the original plans were inadequate.  No detail is available on these lanes or consideration of the safety of  junctions. There is no detail on when the new updated proposals will be available for review. We hope that, unlike the recent cycle lane installed on the approach to Richmond bridge, the lane just doesn’t peter out when the going gets tough.

The subject of our next steps will be on the agenda at our monthly meeting, this Monday 8 October, at 8pm in the Old Ship pub in Richmond. We shall discuss what we do next, including follow up with TfL to understand their involvement. TfL will be critical, as they are part funding the changes.  Come along and share your views, or if you can’t make it, email us on info@richmondlcc.co.uk.

There is still some way to go on this, and we take the council’s willingness to listen as a positive and that they will take this opportunity to make a Twickenham, as we’ve said all along, somewhere to go to, not just drive through. We would like the council to consider our concerns and:

As Tim puts it, everyone should be concerned about the provision of cycling infrastructure in Twickenham, regardless of whether you cycle or not.

‘What can I do?’
We’ve had this question from many of you (and thank you for all your supportive emails, they are appreciated), so here’s our rundown of what you can do to make your voice heard:

– Write to Richmond and Twickenham Times to express your view – lettersrtt@london.newsquest.co.uk

– Write to the Council’s Cycling Champion Councillor Katharine Harborne (Cllr.KHarborne@richmond.gov.uk) and chair of the Transportation Committee Councillor Chris Harrison (Cllr.CHarrison@richmond.gov.uk). They have the most influence on whether the views of cyclists are incorporated.

– Come along to the Council cabinet meeting on the 18th October – This is the best chance to get your points put directly to the cabinet members responsible (full list of cabinet members and contact details here) You can even register to ask a question on the night.

If you’re writing to your Councillor or the paper, feel free to cc us in via info@richmondlcc.co.uk and we’ll keep a note of it.

To help, here’s some background reading to the history of the proposals:
June 2011 we commented on the Twickenham Area Action Plan, where the word cycle was only mentioned once
http://www.richmondlcc.co.uk/2011/06/17/i-want-to-ride-my-bicycle-i-want-to-ride-my-bike/

October 2011, we were hopeful as based on the feedback on the consultation (ending July 2011), cycling started to appear and promises were made
http://www.richmondlcc.co.uk/2011/10/25/maybe-they-are-listening/

January 2012 – a very cold month, and the next consultation stage. We got lots of feedback from local cyclists, and Nick provided a very detailed submission
http://www.richmondlcc.co.uk/2012/01/18/twickenham-town-centre/

July 2012 – and we find out what the proposals are – removal of cycle and bus lanes and a consultation (in the form of a tick box, do you support these proposals) comes out. The results were promising, 67% opposed the removal of the existing London Road mandatory cycle lane. Surely they would now listen.
http://www.richmondlcc.co.uk/2012/07/25/twickenham-street-scene-and-highways-scheme-consultation/

September 2012 – We find out the cycle lane removal is to proceed but that there is now the addition of off peak advisory cycle lanes, though these are not shown on any of the consultation drawings. Anyone who works on major projects, will tell you that such a detail would not be omitted until later – it would be a key design variable incorporated from the start
http://www.richmondlcc.co.uk/2012/09/25/twickenham-consultation-cycle-lane-removal-proceeds/

October 2012 – After several attempts, the council agrees to update the agenda for the upcoming CLG meeting to include discussion of the cycle lanes.
http://www.richmondlcc.co.uk/2012/10/03/twickenham-consultation-cycle-liaison-group-meeting-4-october-2012/

Local blogger Tim Lennon stated very simply the flaws with what the council is proposing.

Interesting debate in the comments section to the article in the Richmond and Twickenham Times.

Confirmed to soon be no more