Post Updated – 8 February
The council has reported that the proposals have been accepted and improvements shall proceed to make this roundabout safer for cyclists using it. This has not been a popular decision and many have objected, including some who have said there is no safety issue, but the statistics clearly show something needs to be done. Having ten times the borough average incident rate for mini roundabouts and a percentage of cycle incidents of 88% compared to the 33% borough average for a mini roundabouts is not acceptable.

Post Updated – 22 December
A big thank you to everyone who took the time to feedback to us about this roundabout. A large number of you shared your stories of near misses and many of you were so intimidated by the current layout it stopped you cycling into Teddington town centre. You can read our submission to the council below:
Teddington Waldegrave Road/High Street Roundabout Consultation – RCC Submission 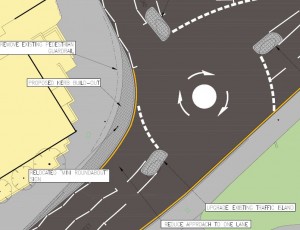 The Waldegrave/High Street mini roundabout in Teddington (Map Link) is one of the most hazardous in the whole borough. The council reports that there have been 16 injury incidents during the last five years, 14 of which involved cyclists. Of these, 12 involved the same manoeuvre – travelling over the railway bridge on High Street, colliding with a right turning vehicle exiting Waldegrave Road. This average (3/year) is ten times the borough average 0.3/year for mini roundabouts. The percentage of cycle incidents at 88% is substantially greater than the 33% borough average for a mini roundabout (which in itself is unacceptable given only 5% of all journeys in the borough are made by cyclists). 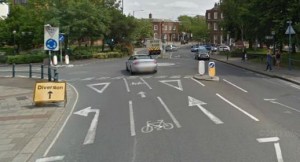 Looking from railway bridge side (High Street). Click to see in Streetview

The current arrangement on the bridge is a two lane vehicle approach with a central cycle lane for straight ahead cyclists. The council lists the following as key factors in the incidents:

The main physical changes proposed are:

We commend the council in addressing the dangers and we support the proposals with the improvements we’ve listed below. Significantly, the removal of pedestrian guard rails (which have been phased out across London partly due to crush injuries to cyclists from turning lorries) and the reduction to a single traffic lane (which will reduce traffic speeds and SMIDSY incidents) will significantly improve safety for cyclists.

We would like the council to also consider the following:

Space is available to address the first two with little cost impact. The 3rd is vital if parents are going to be willing to cycle across this roundabout with their kids to school. As stated above, this roundabout is a serious hazard with ten times the average incident rate of mini roundabouts in the borough.

A diagram is available showing the proposals – Teddington Proposal Diagram

We would ask you to take 2 minutes to contact the council to support their plans and highlight the additional considerations we’ve listed above along with any concerns of your own. Contact is via email at highwaysandtransport@richmond.gov.uk (quote Reference Number 2293_CL_121112_LF) and copy us on info@richmondlcc.co.uk so we can have an idea of how many people have contacted the council. We will also be sending a submission from RCC. Deadline is Friday 21 December.