We’ve said it before, and we’ll say it again, crossing the London Road at the junction with Chertsey Road is difficult and dangerous.  So we were pleased to hear in March that Transport for London was consulting on a plan to make it easier.  We weren’t pleased when we saw it. Why? Because it doesn’t do anything to make crossing less difficult or less dangerous.  Here’s an example of what TfL say:

“In terms of the width of the traffic islands, the Department for Transport has issued guidance which suggests that a cycle with a trailer is 2.75m long, and that the recommended minimum depth of a traffic island (in order to accommodate a cycle with a trailer) should be 3m.  The proposed pedestrian refuge on the southern arm of London Road is 3.5m wide at its widest point, and at the northern arm is 3.7m wide at the widest point.  We are confident therefore that parents using cycles with trailers can be accommodated.”

Forget, for a moment, the relevance of the widest point on an island that’s a tear drop shape and is not designed to be crossed at its widest point anyway: much, much, more important is how do you get on it when traffic is nose to tail and moving at different speeds? 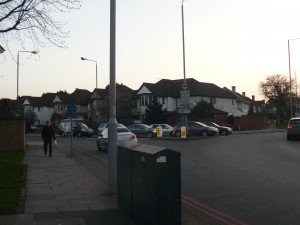 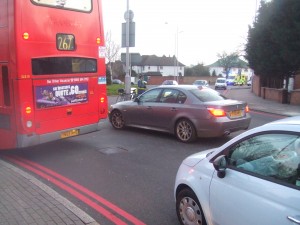 And how do you get off it when vehicles are accelerating into the exit lanes like it’s a race track? 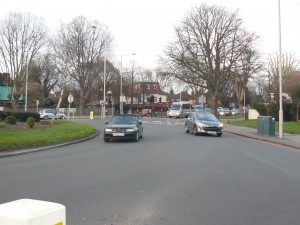 We say people need protected space to cross in and narrowing entrance and exit lanes creates that space.  TfL says:

“Increasing the size of the islands any further would prevent the owners of [properties in] London Road from entering/exiting…  The same issue prevents us from installing zebra crossings – there are a number of dropped kerbs on the north and south sections of London Road and these would prevent the installation of a crossing.  The only available space is approximately 30m from the roundabout (on each arm), which would be too distant from the natural pedestrian desire line to make their provision worthwhile.”

Why can’t TfL install toucan crossings, like the all junctions before and after London Road and like the one that is so well-used on the Richmond side of the roundabout ?

We think it’s disgraceful that people, cyclists and pedestrians, are brought to the edge of a busy road and given no help to cross by TfL: why not? 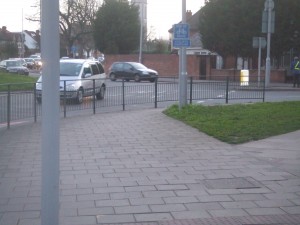 What do you think?  E-mail campaign@richmondlcc.co.uk Remember TfL have been invited to the next meeting of the Cycling Liaison Group on 11th July.

And thanks to Caroline Pidgeon, Chair of the Transport Committee at the Greater London Assembly, for her continuing support, including repeatedly asking the Mayor of London when and what TfL is planning at the junction.

UPDATE: Getting TfL to prioritise the safety of pedestrians and cyclists is not just an issue here in Richmond, over in the City of London, Transport for London won’t release information about whether or not it included cyclists or pedestrians in the models for Blackfriars junction.

Previous Post
Rides for Explorers – 5th June – Along the Grand Union.
Next Post
The most dangerous cycle lane in Richmond?
Menu