This is our letter to Richmond Athletics Association following the weekend demonstration. 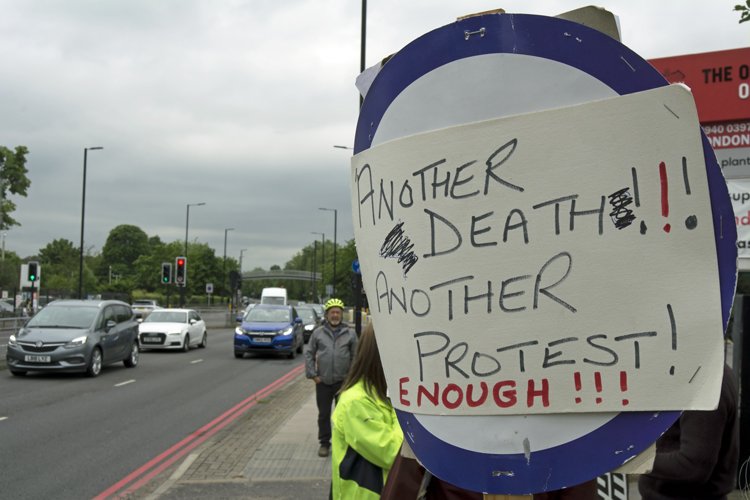 Following our discussion via Twitter Direct Message, this letter concerns the exit onto the A316 from your ground’s car park. As you know, Richmond Cycling Campaign is concerned for the safety of pedestrians and cyclists when using the shared use cycle/pedestrian path that runs parallel to the A316, passing one of the exits from your ground’s car park.

We have received many reports from the general public and our members of unfortunate near misses when using the shared use path, going back many years. The exit suffers from very poor visibility, and a significant minority of drivers using the exit are not doing so safely. Drivers will often cross the shared use path at speed, despite being unable to see if pedestrians and cyclists are approaching with priority along the path. Tragically, in March the unsafe exit was brought to wider public attention by the death of a local teacher who was using the path. She was struck by a van exiting the ground.

I was grateful to receive your assurances by the Twitter Direct Message that you and RAA are actively looking at the situation, and that you are in touch with the relevant local councilors about it.

Richmond Cycling Campaign is now asking the Richmond Athletic Association, as a much valued, longstanding and responsible member of our community, to close this gate and stop drivers from using the exit.

Richmond Cycling Campaign understands that the exit is used extensively when large events are hosted at your venue. Closing it might mean it takes longer for your guests to arrive/depart from your venue onto the A316 when such events occur.

However, the current measures RAA have taken at the exit (signage and road markings) have proven insufficient to mitigate the risk and are not sufficient given the danger posed to pedestrians and cyclists who pass the exit.

We urge you to close this exit immediately, and to direct all traffic from the car park to use the exit towards Pools on the Park.

If you don’t feel able to do this, we ask in the interim:

We look forward to hearing from you.