South West Trains have just installed a new cycle parking facility in the car park of Richmond Railway Station. There are spaces for up to 96 bikes, it is covered and well lit at night. It is also alongside the well frequented pathway from the rear of the station to Church Road  so should improve security. 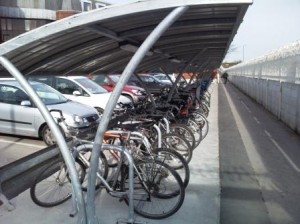 Unfortunately, at present there is not a great awareness of the new facility as there is little signage of its existence, other than this little sign by the station entrance. 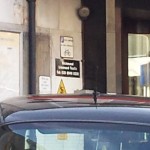 We intend to raise this with SWT and hope to see improved signage installed.

Going forward, we are going to do a survey of cycle parking at all the railway (and underground) stations in the Borough of Richmond. Anyone guess how many there are? Answer in a later post. In the meantime, if there is a particular station you would like us to focus on, send us an email at campaign@richmondlcc.co.uk and we’ll ensure it gets done.

Cycle security remains an issue throughout London, and is an area that London Cycle Campaign is focusing on. It is a very current issue in the Borough of Richmond, as this report from British Transport Police shows – 16 bikes stolen from stations in the first quarter of 2010 (taken from Community and Police Partnership, March Meeting).

For more information on cycle security and how to lock your bike, this pamphlet by Camden Council is highly recommended.