The Royal Parks still won’t fix Duke’s Head Passage. Despite a petition now numbering over 1,300 supporters, they refuse to change their minds on letting people cycle down the passage, to avoid using the A308 and A311 roads around the park.

Since the closure, there’s been more analysis, especially by the ‘Save Our Shared Path’ local community group, who put together the petition.

A number of groups are now looking at this: Richmond Borough’s cycling officer, the Royal Parks’ Walking and Cycling Group, London Cycling and Richmond Cycling, and Save Our Shared Path. In addition, campaigners have gained support from a large number of local groups and individuals, including the Teddington Society, former local MP Vince Cable and many local Councillors.

When we attended the last Walking and Cycling Group at the Royal Parks, the unofficial feedback was that the path would only be re-opened to cycling when it had been upgraded to the standards described in TfL’s London Cycle Design Standards.

However, as pointed out by campaigners, little needs to be done to the path to make it compliant with LCDS standards: the path is used by low volumes of walkers and cyclists, with just two reported incidents in the last five years. Although there are other anecdotal reports of incidents in the passage, and no-one wants to see this, we question the evaluation of the very low level of risks  in the Duke’s Head Passage, versus the proven very high level of conflict and danger experienced by people choosing to cycle on the alternative routes: 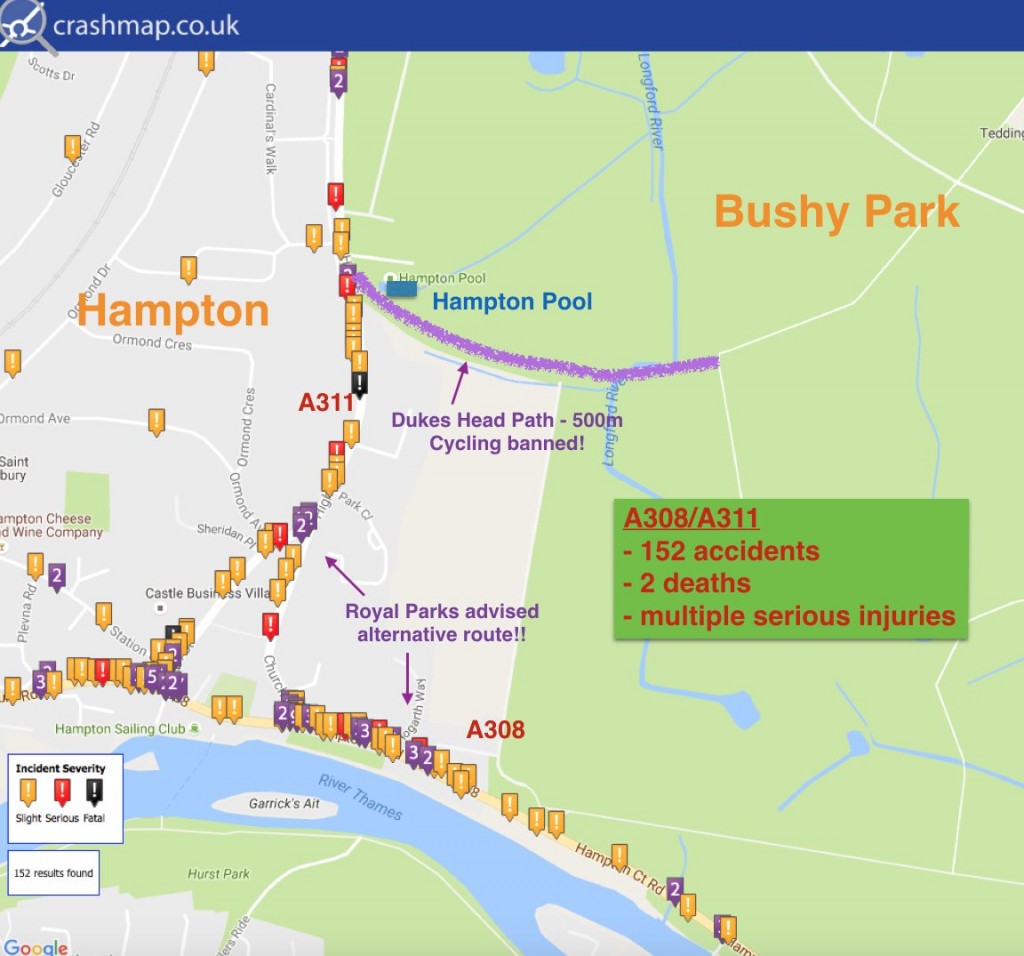 All we ask is for a fair and proportionate response: all path users need to show consideration to others. And, given that the passage has been successfully used for decades, this is all that is needed at present. Certainly, the path could be better for all, by being wider, with a more consistent surface, etc., but we should not wait for this to happen before people are again allowed to cycle safely along the passage.  .

The Royal Parks are sadly not very clear as to how they justify the changes to Dukes’ Head Passage, and they seem entrenched in their narrative that ‘people can always “just get off and walk their bikes for 500m’. We will be raising this again at the next Royal Parks walking and cycling meeting, in the hope that we can get this decision changed.

But in the meantime your help will still make a difference, so here are the things that you can do: