Two years on is it still the most dangerous cycle lane in Richmond?

Back in 2011 we reported on what we thought was the “most dangerous cycle lane in Richmond” where a mum was knocked off her bicycle by a car while cycling with her son. Fortunately the child was not hurt but the mother required medical attention. Serious though it was, they were lucky not to have been knocked onto the dual carriageway and hit by the passing traffic. Located on the A316 at the exit from London Scottish Rugby Club car park between Richmond Circus and Pools on the Park cars often exit as speed without looking for passing cyclists or pedestrians.

The photograph below shows the danger, a lady nearly knocked off her bike by a car exiting the car park. 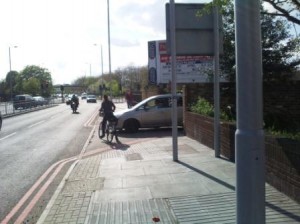 So what has happened since 2011? Has the source of danger been removed and as we proposed, the exit closed and cars redirected to use the entrance?

The photo below was taken in 2011 from inside the car park. Cars exiting are supposed to Stop or Give Way depending on whether they look at the sign or the road markings. An advisory blue sign says ‘Cycle Track – Look Both Ways’

Fast forward two years to 2013 and the picture below shows the current scene. The exit remains open and a new sign has been added off to the side stating ‘Cycles crossing’. The Stop sign has been replaced by a Give Way sign. No speed bump has been added and we continue to get reports from people cycling along this part of the A316 of close calls with cars pulling out at speed. The sort of person impatient enough to drive out at speed isn’t going to be influenced by the presence of a sign or care that it has changed colour.

It’s really disappointing that this is the approach to the safety of those cycling or walking along this stretch. People are quick to jump to ban cycling from paths and parks but there is a real reluctance to remove the danger when it is posed by motor vehicles. When was the last time you saw Motorist Dismount signs? Copenhagenize capture this cultural blindspot really well in this post.

As already said, this is a key route in the Borough, and is used by many families cycling to Pools on the Park and the Thames path. We’ll continue to pressurise TfL on this dangerous section – we met with them earlier this month for an audit of the A316 and this issue was highlighted.

You can do your bit to keep the pressure on – raise it via TFL’s online form and email our London Assembly Members – Tony Arbour (GLA Member for the area tony.arbour@london.gov.uk ) and Caroline Pidgeon (GLA Member for Transport – caroline.pidgeon@london.gov.uk) and also the Council’s Cycling Champion, Cllr Harborne (Cllr.KHarborne@richmond.gov.uk), to make the push for this serious safety issue to be resolved (cc us in so we have a record).

There is also an online discussion of the issue at our Cyclescape page complete with more recent photos.

It’s vital that this issue is dealt with, otherwise, next time we may be reporting a more serious incident.

Previous Post
We ask the tricky questions so you don’t have to. (No.3) Updated
Next Post
Twickenham Bid for ‘Mini Holland’ funding
Menu