Time for 20mph in Richmond 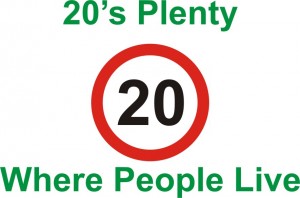 We think 20mph is plenty for our borough. Richmond has few roads where you ever really want to be doing 30mph, and the national (and international) evidence is mounting up.

You don’t think Three filmed this on a 30mph street, do you?

More and more, we’re hearing from other London boroughs, other areas of the UK, and from throughout Europe, about how slower speeds in residential and populous areas is a good thing for everyone involved.

But the council aren’t keen at all. Despite the Twickenham Action Plan including a 20mph limit, they’ve rejected a number of attempts to have specific roads go 20mph. Until recently, what you needed to do was this:

Compare that to the council’s Heathrow referendum in 2013. On a 41% turnout, they had 72% against a third runway. If that had been a 20mph consultation, it would have failed. but here Lord True said “The people have spoken”. (Have a look at the lengthy discussion at the time on Twickerati, if you want to celebrate just how hard they made it.)

We think cycling needs somewhere safe, pleasant and calm, and if you read London Cycling Campaign’s ‘Space 4 Cycling’ pages, you’ll see how 20mph zones are a key component of this.

So take a moment and tell the council that you want 20mph using one of the consultations going on:

Want to know more about 20mph? Try the 20’s Plenty site, read a paper from the Royal Society for the Prevention of Accidents, find out why Bristol is going 20mph, and Camden, and Islington …

Oh, and here’s what Transport for London says: 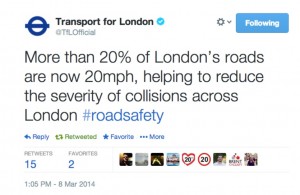 And an update: pop along to Richmond’s local 20’s Plenty group, and sign their petition.

Previous Post
‘Ward Asks’ for LBRUT Council Elections
Next Post
Getting on a bike is just the best thing.
Menu