Petersham Road is closing – but not to walking and cycling …

During August utilities works will close the Petersham Road to motor vehicles through Petersham village.  This will affect both the 371 and 65 bus service, however the local councillors have advised that access will be maintained for pedestrians and cycle users.

(The 371 will operate a split service to either side of the highway works enabling passengers to walk between the two.  The 65 service will be diverted through Twickenham and Teddington. If it operates in the same way as last time, it will allow passengers to alight on the Middlesex side of the Teddington footbridge to access Ham.)

For current and potential cycle users there is currently no dedicated cycle route between Kingston, Ham and Richmond but here are some options:­­ (see the map below for the numbers shown by each option)

The Petersham Road is the only carriageway between Ham/ Petersham and Richmond and the sole public transport route making this a significant closure for residents and visitors. Allowing cycles to pass during the works will make this the fastest way to Richmond and beyond.

The Ham Avenues are level paths, frequently used by cyclists, pedestrians and dog walkers, however the loose gravel surface finds its way into the chain and mech when wet.  They join the Petersham Road where the roadworks are located.

The shared cycle/ footpath along the west boundary of the park can be used to bypass the roadworks between Kingston & Ham Gates and Petersham Gate.  The inclines are relatively shallow but there is loose gravel on some parts.

Pushing the bike over the bridge and cycling along the road parallel to the river gives access to Richmond through Teddington, Twickenham and St Margarets.  The road has an advisory cycle lane in parts or you can opt for the riverside path beyond Orleans House.

The Hammertons Ferry takes bikes for an additional charge.  Crossings are not scheduled; waiting times vary. 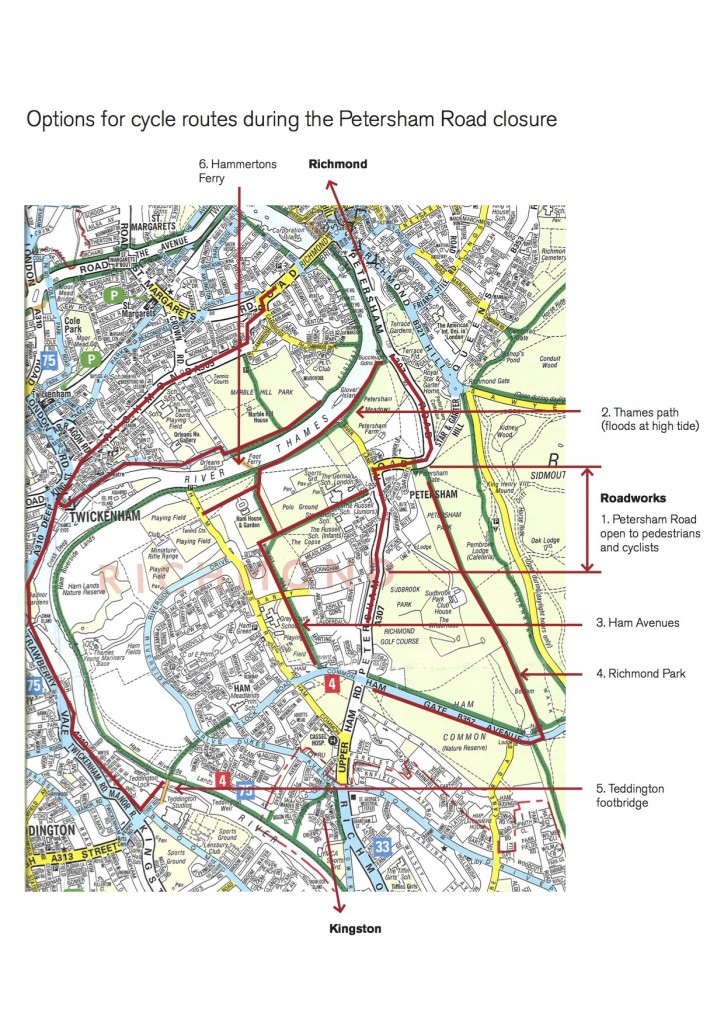