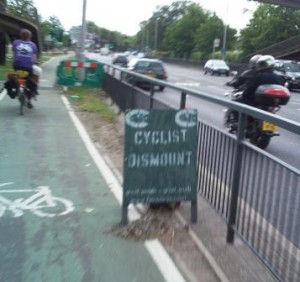 We’re moving fast towards the end of the campaigning year with RCC’s annual meeting on Monday 14th November and LCC AGM on 16th, so we’ve been thinking about doing things next year, with the London Assembly elections on 3rd May and the associated LCC 2012 campaign “Go Dutch“.

We think we can strengthen what we already do by continuing to develop the veloteer idea used so effectively for the railway station cycle parking audits and the reports on Hammersmith Bridge and London Road roundabout.

Why do we think that?  Because as a local cyclist you know the routes, what works and what doesn’t.  You know the problems and because you know the problems you’re likely to know how to solve them.  So you’ll know whether the works proposed by the Council, and TfL, will actually make your cycle journey better, or worse, or make no difference at all. Living locally means you can use your democratic right to ask your local  councillor what’s going on.  And because the Council’s highway officers have a geographic responsiblity we can develop a working relationship at a practical level.

We think there may be 9 patches in the Borough and if you live in one of them we’re asking you to get involved (and that involvement can be as simple as the occasional email or more involved if you want, the level of commitment is up to you):

6. Whitton, North A316 from Marlow Crescent

We also think the A316 Cycle Route should be have its own veloteers because it runs through so many of the patches and is such an important route.

E-mail: campaign@richmondlcc.co.uk to make a difference to cycling in Richmond Borough, we know many of you already do.