When we last looked into the cycle theft stats in the borough back in 2010, the post was ‘Are you one of the 2,296’. This time around 4,181 bikes have been reported stolen between the start of 2010 and the end of July 2012. This comes after we were told that 1 in every 5 theft in the borough is of a bike. We obtained the numbers via a Freedom of Information request and we’ve uploaded both the FoI response from the Met and an analysis of the numbers so you can look at them for yourself. For comparison, this is the previous FoI response from 2010. Some of the main points:

The chart below shows where the thefts have occurred since 2010 (click on the chart to see a larger version). 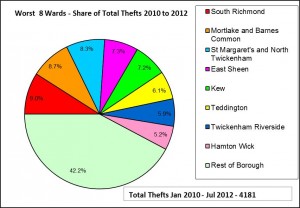 We asked the police in Richmond what they were doing to tackle cycle theft in the Borough and they provided the following statement:

“Richmond upon Thames SNT’s regularly perform cycle marking at a variety of community events and locations. SNT’s also operate an ‘on demand’ system to mark cycles for the public. Since inception, the total number of cycles security marked across the borough is just approaching 12500 (as of 15/08/2012). They also plan their patrols around the locations of reported crime and the feedback received from Police Liaison Group meetings with local residents. The Richmond Borough Safer Transport Team do a lot of work around the borough’s transport hubs to deter and prevent thefts. They have run and continue to do so, pro active operations targeted at bicycle thieves and their uniformed presence at rail stations is a key deterrent. Richmond Borough Police also work closely with the Richmond Local Authority as part of the Community Safety Partnership. They post cycle crime prevention advice via both the Council and Police websites as well as through Twitter. Communication on cycle crime prevention advice is provided by Operation Lockout at regular events in collaboration with SNT’s. Pan London the Metropolitan Police Service has The Cycle Task Force which is a dedicated unit to tackle cycle theft and improve cycle security across London.”

Here at RCC, earlier this year we contacted Richmond Police, with the offer to promote their cycle marking events on our website and in our monthly email newsletter – so far North Richmond, South Richmond and Kew Safer Neighbourhood Teams have taken us up on our offer and we hope others will too. We’ve also produced an updated Bike Security page, with advice on how to lock your bike securely, getting it marked and minimising your chances of becoming a statistic in our next round up in two years time. As a local cyclist shared with us, it’s not fun losing your pride and joy.