Maybe they are listening…

Back in June we asked you to respond to the Council’s consultation on the Twickenham Area Action Plan [click here for the original post] We said then:

“Unfortunately the 8 page consultation leaflet ”Twickenham Rediscovered, looking back looking forward” available at yesterday’s public meeting and here doesn’t actually use the words “bicycle”, “cycling” or “cyclist”.  “Cycle” does appear, once, on page 3: “Limited widening of eastern footway in London Road through removal of cycle lane.”

Well, a report on the consultation for the Council’s Cabinet has been published [click here] together with a summary of all consultation on the options [click here]  If you live, work or spend time in Twickenham you’ll be interested in all of it but as cyclists we’re particularly interested in what it says on page 49 of the Cabinet report under 3.19 Responses to Traffic and Pedestrian Proposals:

“Separate comments received within the questionnaires and at various meetings included concerns about sufficient provision being made for cyclists.”

“It is proposed that further detailed feasibility work and modelling is carried out.  The main areas for further investigative work are:

Station area improvements, including consideration of bus lanes and stops, provision for cyclists and taxis, improved junctions and site access;

So thanks to all of you who responded to the consultation and made sure cycling in Twickenham is on the agenda.

What we didn’t have in June was the cycle collisions data the Council gave us in September.  This shows clearly clusters of blue squares [serious collisions] and green circles [slight collisions] in Heath Road, King Street and London Road [click on the photo to make it a bit bigger and a bit easier to see] 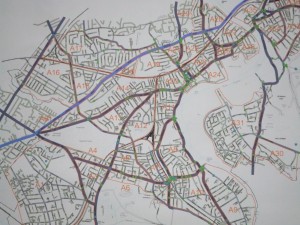 At last night’s meeting of the Cycling Liaison Group we asked the Council if they use the cycle collision data to 1) prioritise highway engineering works and 2) decide what work is appropriate.  They said “yes we do“, the officers discuss it with the Cabinet Member when deciding on the programme of works for the next financial year.  That time is soon so while we work through the CLG we’re asking those of you living in Twickenham to ask your councillors what’s being done to reduce the number and severity of cycle collisions. King Street and London Road south of the railway are in Twickenham Riverside Ward, London Road north of the railway in St Margaret’s and North Twickenham and Heath Road is South Twickenham, according to My Richmond.

Depending on the cause of each collision maybe 20mph zones are the way to go in Richmond [including Richmond Bridge] and Twickenham town centres.

In August we asked you to respond to TfL’s consultation on the proposal to permanently close the junctions on the Chertsey Road at Godfrey Avenue, Redway Drive and Jublilee Avenue [click here for the original post] We’ve received this reply to our response:

“TfL considers that this current proposal will reduce illegal rat running through Redway Drive, the proposals will also encourage cyclists to use this adjacent route as an alternative to the shared use footway.

With regard to the bollards at Jubilee Avenue, I can confirm that the bollard on the northern side of the junction between the telecommunications box and the railings will be removed from the proposal and a further bollard will be relocated as per the attached design. TfL considers that the remaining bollards follow the line of the northern timber fence and therefore do not present a significant barrier to cyclists or pedestrians.

TfL is currently investigating renewal of the lighting columns on the A316 and will, subject to feasibility and the availability of funding seek to relocate the lamp columns away from the centre of the footway. Resurfacing of the route will be considered as part of our future maintenance. In the interim we will instruct our maintenance team to trim back the existing foliage to maximise the available width.”

E-mail: campaign@richmondlcc.co.uk with your thoughts about cycling in Twickenham and on the A316 Cycle Route