This is Richmond Cycling’s draft response to TfL’s consultation on changes at Manor Circus. Please share any comments below, via our feedback form, or to campaign@richmondlcc.co.uk.

Although RCC is supportive that genuine efforts are being made to improve this junction for cycling, we think that the changes have three key problems:

The specific items we identify: 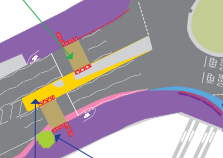 In the new design, the time to cross two arms of the roundabout could increase by at least three minutes. Not only do pedestrians have to walk further to cross each arm, but they have to wait twice on the A316.

Making pedestrians walk further is going to increase the chances that they will attempt to cross at the most convenient place – desire lines for walking and cycling have not been supported in this design.

Why not instead, have some nice shared zebras like this? 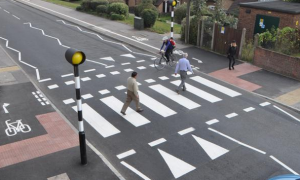 This is perhaps inevitable. Current behaviour in the area suggests that this will not change hugely – luckily both sides seem fairly considerate. However, it seems nonsensical to remove some of the already separate provision, in order to make the shared space look nicer.

TfL is already planning this at Elsinore Way. The same opportunity should be taken at these locations, rather than North Road having markings specific to cycling which will inevitably be ignored by all the current users.

This seems inevitable – it queues already, and there’s nothing obvious that can be done. Perhaps the better use would be a yellow box to prevent waiting on the roundabout?

At present, the design outside the petrol station does not support pedestrian priority across its exits, nor does it sufficiently protect pedestrian space around its periphery. The kerb on the A316 north side needs improving to remove the drop, pedestrians and cycling should have priority when coming round to Sandycombe Road, and the petrol station exit requires marking better. This area might also be improved by taking space from the barrier that separates the lanes at the top of Sandycombe Road.

By providing the on/off markings, it isn’t really clear where people should expect to be cycling, or indeed where other road users might expect to see someone cycling.

The design suggests that cycling should stop and start down here, and does not make it clear that someone coming onto the road is going to be inserted into traffic which is quite likely to want to turn left into Sainsbury’s. At the very least, there should be markings of a different colour on the road which indicate that those cycling will often want to carry on.