Heath Road Consultation … Not Exactly Cycling for 8 to 80 …

Heath Road is up for some cycling improvements (see here), but we’re not sure they’re going to make much difference.  Consultation close 5th July – please fill it in to make cycling’s voice loud!

You can see from this image:

All of these are problems if the council wants more people to cycle, because they mean that this road will continue to look unpleasant for being on a bike, with neither actual nor perceived protection.

We would like to see ‘floating bus stops’ on this stretch.  Check out this elegant solution on Cycle Superhighway 2. 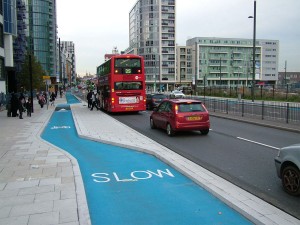 We think the London Cycle Design Standards (see here) need applying on this road, and we’d like the council to think again:  Please take the time to fill in the consultation, if you like you can use our recommended response below.   It doesn’t take many responses to influence things for the better!!

RCC would like for this scheme to go ahead, it is encouraging to see cyclists being considered on main roads.  However prior to implementation there should be a redesign as described below.   The proposal currently falls well short of modern cycle design standards and will do little to improve cycle safety or encourage those currently not confident enough to cycle onto their bicycles:

In summary, it is good that cycling is being considered but note that if we as a borough are to get more people cycling for the ‘utility’ and simple journeys that will make a real difference to congestion and well-being routes like this: