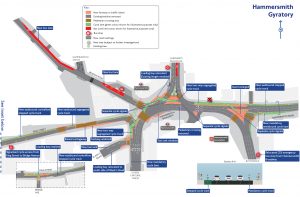 Improvements are afoot at one of the key gateways into the borough.  Please take a moment to respond to tfl’s consultation to show your support.  Copy our response below or write your own.   In general the proposals look good, but as always there is room to make them better.  How it links into our borough has not been fully thought through.  CLOSES on 15th March

RESPONSE TO THE HAMMERSMITH GYRATORY CONSULTATION

We have read and fully support the erudite comments submitted by John Griffiths on behalf of the Hammersmith & Fulham Cycling Campaign.

In addition, we should like to make the following points :­

1 The importance should be recognised of traffic flows over Hammersmith Bridge and the dangers which such flows present to cyclists who, on the south side, can approach the bridge by an officially recommended “Quietway”.

2 Nothing is said about the timing of the implementation of the proposals under consultation, which may be critical in view of the planned closure of Hammersmith Bridge for major repair work later this year, and the resulting changes in traffic flows as drivers are forced to use Putney and Chiswick Bridges instead.

3 While concentration on improving the west ­to­ east route for cyclists, along Street and the north side of the gyratory system may have some benefits in terms of cyclists’ speed and safety, if successfully implemented (which is open to some in view of H&F CC’s comments), there are intrinsically greater dangers to cyclists elsewhere in the gyratory system, particularly for those heading south along the eastbound side and then wishing to turn right in order to access Hammersmith Bridge Road. Here they have to thread their way through fast­moving motor traffic both to their right and their left.