Background: All three Councillors for the Ham & Petersham & Richmond Riverside Ward signed up to the London Cycling Campaign “Ward Ask” which was to create a safe surfaced route for cycling and walking from Ham to Richmond. As a starting point towards that Cllr Loveland, Cllr Frost, Andrew Beedham (Chair of the Ham Forum), several representatives of the Richmond group of London Cycling Campaign as well as other interested local people met to cycle the route and talk about how it could be improved.

I have done my best to put together all the thoughts, problems and suggestions that were raised during this ride., but of course there will always be more to add. While I have included the ideas and solutions put forward to some of the difficulties presented by this route, the intention was not to try to present technical solutions as this is a job for Council officials.

1. This section is wide enough for advisory cycle lanes to be marked on both sides. This would alert motor traffic to people on bikes

1. This section is not wide enough for cycle lanes however the central white lines could be removed. It was noted that during the period when the road was resurfaced and there were no markings, cars treated cyclists with more caution when overtaking. This concept is backed up by studies from the recent TfL London Cycling Design Standards, which states:

Psychological traffic calming
5.3.8 The character of the street has a subtle effect on traffic speeds: the street width, lane widths, the amount of greenery, the sense of enclosure given by the buildings, the levels of activity and the uses that the street supports. If motorists perceive that they have unbridled priority and that the street has been designed primarily for through traffic, then they will drive accordingly.

5.3.9 A study by TRL,’Psychological’ traffic calming(2005),compared different design techniques for traffic calming, together with more conventional speed reduction methods. Uncertainty was observed to be very effective in reducing speed, particularly ‘tree buildouts’. The greatest impacts were achieved using combinations of psychological and physical measures. Geometry is a key factor: when motorists are in more doubt about whether the space exists to make a passing manoeuvre, they are likely to overtake more slowly and more carefully (if at all).

5.3.10 Features that may support this psychological calming effect include: 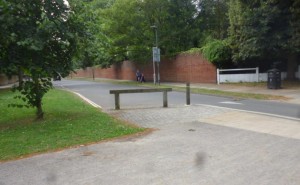 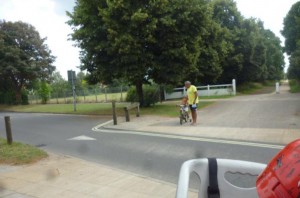 Background: The built out crossing was meant to slow motor traffic but creates an unnecessary inconvenience for people cycling along Sandy Lane towards Ham Street as they have to stop to give way too. There is also a danger and inconvenience for people cycling from Ham Street towards Petersham Road as motor traffic often does not see/ or just fails to give way to cyclists. The advantage of the built out crossing is that it links the well-used Ham Avenues and creates a safe crossing point for people on foot and bike, particularly for children and buggies because on one side is the Sandy Lane playground and on the other is Greycourt School.

2. Build a fully segregated cycle path down both sides of the street, from Ham Street to where the residential housing begins. 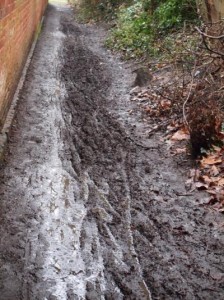 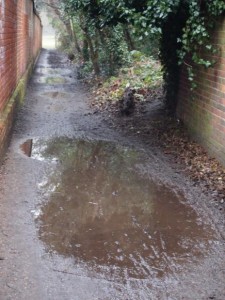 Cut Throat Alley is a valuable walking and cycling link between Ham Street and the Avenues. It is a safe child-friendly route to reach the Russell, German, Strathmore Schools as well as the KISH (Kindergarten in the Scout Hut) and onwards to Richmond. The narrow winding alley and path bumpy path surface keep speeds extremely low and users are almost always polite and considerate when walking and cycling through.

Throughout the autumn/ winter/ spring the second half of the alley, the part furthest from Ham Street does not drain and becomes dangerously muddy.  Apart from creating a slipping hazard this makes the route unappealing for anyone who does not want to reach their destination covered in mud.

2. Look into improving the water drainage on this part of the path. The first part of the path has the same surface but does not end up with deep mud. What is causing this difference? Is it just the leaves?

3. It was noted that this problem cannot be solved, as previously tried, by scattering a layer of pebbles, as this just increases the slipping hazard. 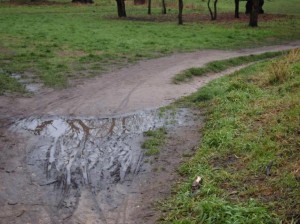 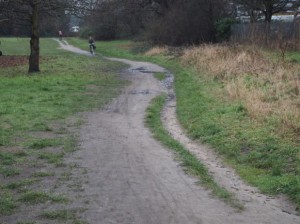 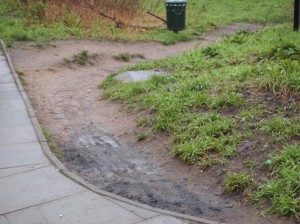 The path could be properly linked to the pavements at either end.  Currently there is an uneven drop at both the meeting point with Meadland Drive and with the Ham Avenues. 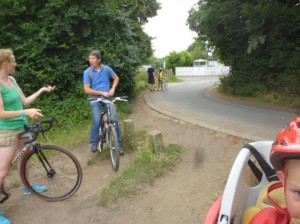 At the point where the Ham Avenues intersect with the Polo Club/ German School access road and the aforementioned path across the Copse there is a dangerous spot. School coaches, horse boxes, delivery trucks and other motor traffic comes down the one-way loop service road to the Polo Club and German School, and around the blind corner. When crossing from the Avenue to the Copse path on a bike or on foot with kids it is not possible to get out of the way in time once you hear a vehicle coming. The alternative to using the service road is a ditch next to the path wide enough for a person on foot but not for bike or buggy. If the hedge were cut back and the Ham Avenue surface extended this ditch could be changed to create a safe alternative link. 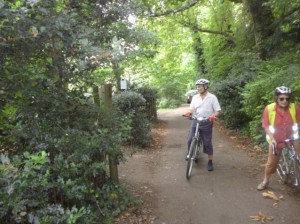 At this point, coming from the Ham Avenues or the Petersham Nurseries, the wooden sign indicating the footpath is behind a hedge and facing in the other direction. In the photo you can see the wooden posts of the sign on the left behind the foliage.  Straight ahead is the Scout land which is not a public right of way.  To the right is the path leading towards Water Lane and Ham Nurseries. This sign is currently not usefully visible to anyone.

This is a key section of this route and the one which presents the most obstacles but also many opportunities.  I have divided the main possible routes into options A, B, C and D. They are not mutually exclusive as a combination of improvements would be likely to attract a wide range of users.

A. The Tow Path: This is the most obvious off road link for this part of the route. The difficulties with it are that the path is not well-surfaced and it gets very muddy for much of the year (see photo below).  In order to make this route attractive to people getting to work/ school/ shops who do not want to arrive covered in mud, an alternative needs to be found. 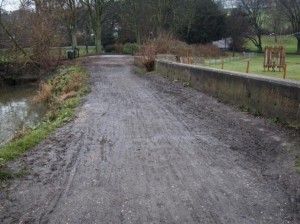 The towpath floods fairly regularly when there are very high tides, which means that it is sometimes impassable and the flooding makes the mud worse. Below: people trying to negotiate it at a high tide. 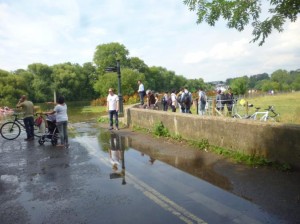 Below: Some pedestrians avoid the mud by climbing over the wall and walking on the grass in Petersham Meadow. This is not a solution for the less able or people on bikes/ with buggies. B. Main Path across Petersham Meadow: This is the first alternative to the towpath 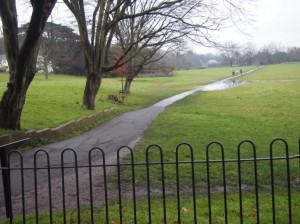 As you can see in the picture above this path is narrow and also prone to flooding but is not muddy because it is a tarmacked.  In order to be a genuinely useful link all year the path would need to be raised. Above: Kissing gate by Buccleuch Gardens leading into Petersham Meadow 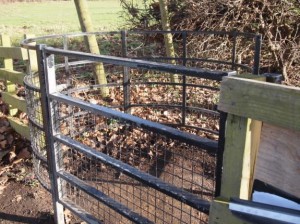 Above: Kissing gate leading from the meadow to Petersham Nurseries.

At either end of the route there are kissing gates to prevent the cows from escaping. The gates are not big enough to allow longer bikes, bikes with trailers, cargo bikes, or double buggies to pass through and are difficult to negotiate for standard bikes too.

In Cambridge, where many cows graze on common land there is a standard design for a cattle grid which cyclists can cross with a separate pedestrian gate next to it. The link gives lots of information and examples http://www.camcycle.org.uk/resources/cattlegrids/ Below is one example of cattle grids for pedestrians and cyclists. Another difficulty with this route across the meadow is that when you reach the Petersham Nurseries side there is a narrow path leading to a bumpy muddy track past the nursery and then another even narrower path linking with Water Lane. This last link is really only suitable for people on foot who do not mind the mud, so it does not provide an inclusive route for all. Alternatively, you can go straight ahead past the church and join Petersham Road.

Below: the track next to Petersham Nurseries  and Petersham Church (Feb 2014) 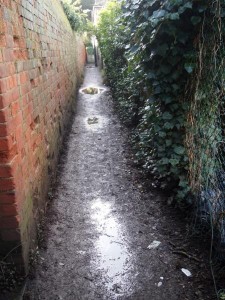 C. Entrance to Petersham field through kissing gate on River Lane, next to Old Cow Sheds (below). 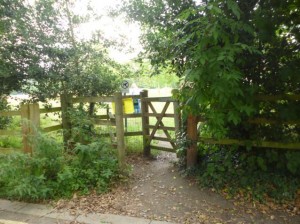 Another potential link across Petersham Meadow begins at the entrance through the kissing gate on Water Lane. Currently, the gate is so narrow that no bikes can pass through, and it is also too narrow for a larger person or pregnant woman to pass through – not an inclusive design. The track leads straight across the field to the kissing gate by Buccleuch Gardens. This removes the problem of the difficult section around the Petersham Nurseries and Church altogether. The disadvantage of trying to push for this possibility is that it would mean creating a properly surfaced path across the meadow (raised to avoid flooding). As the view from Richmond Hill overlooking the meadow is protected it could be difficult to get approval for a surfaced path here. 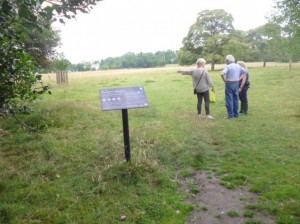 Above: track from Water Lane kissing gate across the meadow

Lower path running alongside Petersham Road, from the Dysart Arms to the Rose of York. 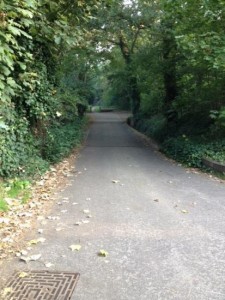 Above: the is start of the off road path linking two sections of the Petersham Road,  next to the meadow, from the Dysart entrance to Richmond Park to the Rose of York pub. The first part above is surfaced because it is also a driveway, the second part (below) is a dirt track.

Below: where the path comes to end, bringing you back on to the Petersham Road.  This path also gets muddy in winter but if it was properly surfaced it could potentially provide a solution to the problem of crossing Petersham Meadow. 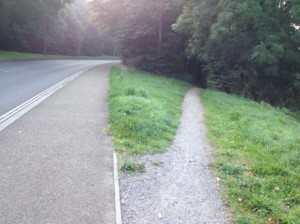 Below: A few metres further along the road is another narrow kissing gate which is too small to be passable for cycles and leads to another track around the edge of the meadow, linking up with the Buccleuch Gardens kissing gate. The path and the gate could be linked, the gate could be changed and the path surface around the edge of the meadow could be improved. This could then provide a link which would not effect the view from Richmond Hill. D. On road route on Petersham Road between the Rose of York and the Richmond Hill road junction.

This could be improved by redesigning the wide section of Petersham Road (below) by putting in an (at least) 2 metre wide segregated cycle path on the Petersham Common side of the road, with corresponding redesign of the junction. As it stands, this wide smooth section of the road encourages motor traffic to speed when clear, and leaves bikes blocked in when congested. I would like to end on a positive note, with an example of a good piece of infrastructure, which has recently been repaired, (admittedly after many complaints by locals) and now continues to provide a valuable link in the chain of this route. The bridge below, leading between Ham House and the towpath by the Hammerton Ferry stop is in keeping with its surroundings, suitable for all possible route users and extremely well-used. 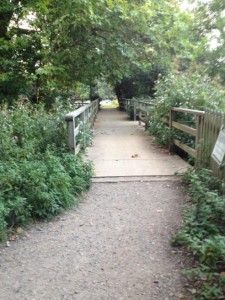