Getting serious about cycling.

it’s a real breakthrough to see schemes from Richmond Council which seriously consider cycling: Although only a short distance, this cycle lane on London Road (consultation here) reflects a step change in ambition and thought for transport that it is a real pleasure to see.

in particular, this design includes a cycle lane which has priority over the roads out crosses, meaning that a journey down here should not be the stop-start unpleasantness of the A316 route.

There are a number of problems with the proposal, however …

It’s going to be narrow – at just 2.5m wide for two lanes of cycling, anyone on the outside of this track could find cycling very tricky if there’s someone coming the other way.

If the cycle lane is on the current pavement, then the outside lane is not going to be completely usable. As well as the edge that no-one will want to cycle too close to,there will be a series of dropped kerbs for access, making the ride even less pleasant.

And the ‘treatment’ of the priority on the side roads could be improved. This is how the Dutch do it. (Picture courtesy of the Alternative Department of Transport and Google Maps.) 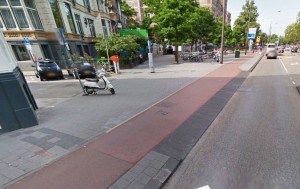 Getting to the lane if you’re heading from Twickenham outwards will also be less than convenient, because the main junction with Whitton Road includes no changes to make it easy to get across, with no cycle lane at all from the bridge until the proposed cycle lane.

Note also, on the Dutch design above, they’ve managed to sympathetically put in a cycle lane, walking, and driving, with space for all of them – including a lane on each side of the road, which would answer a lot of the issues we’ve identified.

Perhaps worst for this section, Cole Park Road has a different design to all the other junctions, which is going to be confusing and likely to lead to conflict.

And even with the existing design, the lane just gives up, with cycling once again coming into direct conflict with walking. Since the council is already on the receiving end of complaints about cycling on pavements, encouraging this more can only seem a retrograde step.

This really is a welcome change, and we applaud the council for the implied change in emphasis and thought. However, routes like this:

if we as a borough are to get more people cycling for the ‘utility’ and simple journeys that will make a real difference to congestion and well-being.

We think the council should have a cycle track on each side, give it priority over side roads – and give pedestrians priority at the same places – and continue the route all the way to the cycle lanes into Twickenham. If you agree, respond to their consultation here: https://consultation.richmond.gov.uk/community-engagement/proposed-cycling-improvements-in-london-road