It’s two weeks since CLG met, arranged after the scheduled one was cancelled, and two weeks before the next on Monday 3rd October so, ahead of publication of the official record, a few things to think about.

Discussing this [Item 3g, page 2] we stumbled into a party political difference that became clearer on 9th September when the Richmond and Twickenham Times quoted Councillor Geoffrey Samuel, deputy leader of Richmond Council:

“We are very happy to follow national policies and guidelines and Greater London policies, but we don’t believe Richmond should be singled out for political experiments on the modification of how people get about the borough.”

Now, “Political experiments“ is a very strange and confused characterisation of an intervention the National Institute for Health and Clinical Excellence said in their report “Preventing unintentional road injuries among under 15s”

“will reduce casualties by around 40%”

and went on to say:

“Signage, road design and engineering should be used to reduce vehicle speeds on roads where children and young people are likely to be, such as playgrounds, schools, residential roads or where pedestrians and cyclist journeys are frequent.”

Interesting also to compare Cllr Samuel’s words with the Mayor of London in his written response to the following cycling related question:

Question No: 2641 / 2011 “Do you believe that 20mph speed limits make the roads safer for cyclists and pedestrians alike?”

“The introduction of 20mph speed limits can improve safety for all road users.  Research by the School of Hygiene and Tropical Medicine found that 20mph zones have reduced casualties by up to 40% in locations where they have been implemented in London.

My Transport Strategy acknowledges the benefits of 20mph zones in making streets safer for pedestrians and cyclists.  In addition, TfL looks to include lower speed limits as part of new scheme designs where appropriate.  For example, as part of the implementation of new Cycle Superhighway 8, a 20mph speed limit has been introduced at Old York Road.

In considering the introduction of lower speed limits a number of factors need to be taken into consideration including potential safety benefits, the characteristics and function of the road in question, the impacts on traffic flow and the practicality and cost of implementation and enforcement.  As such, the potential for new 20mph limits will vary by area and road type.”

Presumably Cllr Samuel relies on the last sentence to support his position.

Given the Metropolitan Police Service issue fixed penalty notices to cyclists using the pavement to cross Richmond Bridge, and it’s unlikely the Council will make the footway shared use, we think the Bridge exactly meets the NICE description “where pedestrians and cyclist journeys are frequent” and should be part of a 20mph zone. 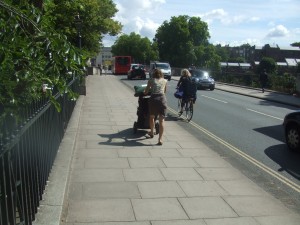 We’ve heard our Borough has the second lowest number of 20mph zones in the country but have yet to confirm it.

During their presentation about SkyRide Local we were interested to hear British Cycling moving into the gap left by the abolition of Cycling England nationally, and Smarter Travel Richmond locally, and talking about cycling to work issues like secure parking and showers.

There seemed to be general support for our proposal to de-regulate footpaths on a case by case basis without deciding on the particular paths we suggested.  We’ve asked to be told at the next meeting what the decision making process will be.

Blandford Road to Bushy Park, about 4 metres wide and linking to the pelican that should have been a toucan in Blandford Road 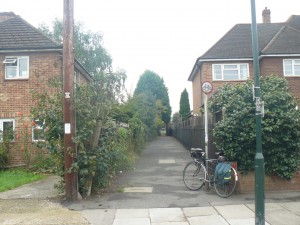 linking to the new crossing of Uxbridge Road into Burtons Road

Oldfield Road to Upper Sunbury Road where there’s a toucan and a marked cycle route but also a no cycling sign.

Still in discussion with TfL although we weren’t told why.

Pleased to see one of our quick win suggestions make it on to the list [Scheme 3 Kingston Bridge] and very pleased to see consideration of Hampton Court Bridge [Scheme 4 Hampton Court roundabout] We’ve asked for a timetable so we know when work will be done.

Agenda 9 Any other business

RCC members, both at the meeting and in e-mails ahead of it, asked about vehicles parking in cycle lanes, particularly in Lonsdale Road, Barnes and Staines Road, Hampton.

The definitive word on cycle lanes is in paragraph 16, pages 95 to 101, of the Traffic Signs Manual but by coincidence they were raised in a series of cycling related questions to the Mayor that received written replies, including these two relevant to our members concerns:

“It is not my policy to allow trucks to use cycle lanes.  Cycle lanes which have a solid white line are only for the use of cycles and no other vehicles may drive or park in them at any time during their hours of operation.  Other vehicles are also not allowed to enter cycle lanes with a dashed white line unless it is unavoidable.  This is set out in the Highway Code.”

Question No: 2773 / 2011 “I understand different stretches of cycle lane have distinct levels of authority; mandatory, advisory and the highly recognisable blue surfacing, but what is the penalty for a driver that breaches the rules and drives into any sort of cycle lane? How many drivers have been penalised for such transgressions in each year of your Mayoralty?”

“Officers are drafting a response which will be sent shortly.”

Chris Smith, LBRuT Integrated Transport Planning Manager was quite clear at the meeting:  report it as a parking complaint for enforcement action by their team of 35.

We were also told, out of the blue, that the cycle lane in Kew Road is to be removed.  The local councillor was surprised, particularly when told there was a consultation “years ago“.  The justification for its removal was the LCN route using Ennerdale Road.  Apart from our concerns about the safety of that route we don’t think this is either/or.  With the planned Cycle Superhighway on the north side of Kew Bridge the Kew Road cycle lane provides a link between it and the nearest thing we’ve got to a cycle superhighway, the A316 Cycle Route. The removal of the lane is very short-sighted. E-mail Cllr.JBurford@richmond.gov.uk who was at the meeting and surprised to hear about it.

E-mail campaign@richmondlcc.co.uk with your comments or issues to raise at the meeting on 3rd October.