A special guest post from Walton on Thames cyclist Parimal highlighting an important consultation for anyone who cycles in through that town, or in fact anywhere within Surrey CC’s remit.

Walton Bridge has shared paths for cyclists and pedestrians. Photo by Get Surrey

Surrey County Council are, at the time of writing, consulting on implementing some cycling facilities in Walton-on-Thames to act as a link to the shiny new bridge that has been installed. 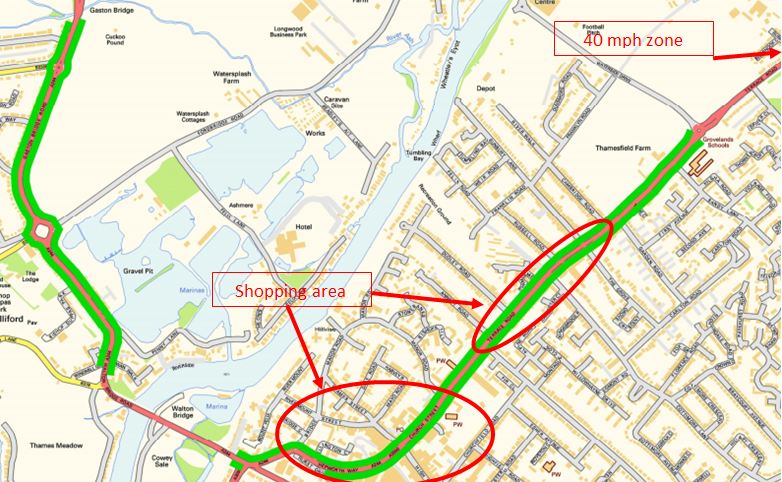 The full consultation including plans can be found here (deadline to respond Monday 19 August). In summary, the proposals being consulted upon involve:

From the overview of the plans we can see that the shared paths run through the shopping areas of Walton-on-Thames, pavements that are heavily used by pedestrians to go shopping. These plans deliberately put cyclists in conflict with pedestrians because they fail to recognise that shared paths only ever work when there are very few users of vastly different speeds. In these plans at each junction along the main road, cyclists do not have right of way posing a further danger to them and pedestrians.

The plans appear to have been designed to get cyclists out of the way of motorists and put them into direct conflict with pedestrians in an area heavily used by pedestrians.

This excellent video by WokingTrafficSafety shows a walkthrough of the pavements in Walton-on-Thames that these plans are for.

Surrey County Council are willing to take away some road space in an attempt to widen the pavements. However, the use of shared pavements in this area is completely inappropriate. There is enough room on the roads in question to have pavements, wide separated cycle lanes, which have same priority as adjacent roadway, and two way roadway for motor traffic. However, it requires the will to reallocate space properly.

The full consultation details can be found here. Please take 2 minutes to fill in the tick box online questionnaire before the Monday 19 August deadline.