Better by Bike – Cycling while pregnant

We’re always keen to promote cycling as means to make our borough a nicer place, by reducing congestion and pollution and making us all that little bit healthier. To help do this, as part of our ‘Better by Bike’ series, we’re sharing stories of local residents and their experiences.

This week, Mortlake resident Sarah Blackburn shares her personal experiences of cycling while pregnant, in an article she originally produced for our friends at Richmond NCT, the Richmond branch of the NCT (National Childbirth Trust) which covers Richmond, Barnes, Kew, East Sheen, Mortlake and Ham. As well as organising antenatal classes, they also provide post natal support to new mums and dads – check them out on Twitter and Facebook.

If you’d like the opportunity of a guest spot on our website to write about anything local and cycling related, do get in touch. 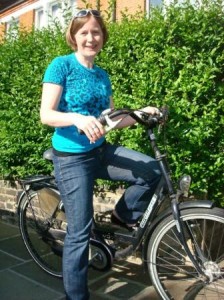 I’m a keen cyclist, although having cycled and mountain biked as a teenager growing up in Yorkshire, at first I thought those who cycled in London a bit mad. But after living here for a couple of years, I gradually progressed from cycling short distances near home and my longer commute on light summer evenings to a stage where I would cycle daily the 8 miles each way to and from central London on busy roads without being phased or feeling unsafe: I knew how to spot traffic and how to make myself visible (bright clothes, good lights, position on the road).

So when I became pregnant I didn’t feel like I should give up cycling. I modified my route to make more use of slower but more cycle friendly routes (the ones I’d recommend to friends who were interested in taking up cycle commuting), for instance through Hyde Park instead of the A4 past Harrods; I set off earlier in the morning to avoid the heaviest traffic; and I slowed my pace, choosing to let others race lights, mopeds and cars! There were days when I didn’t feel like cycling as I felt nauseous, but as it was mid-summer, generally my bike was more pleasant than the bus & tube or train & bus options to get to my office.

I also looked at several articles on the web about cycling in pregnancy and sport in general while expecting including this inspirational blog from a guardian writer:
http://www.guardian.co.uk/environment/green-living-blog/2010/may/21/pregnant-cyclists

and the CTC’s guidelines PDF:
http://www.ctc.org.uk/resources/Training_and_Education/CTC_Women_on_Wheels.pdf.

I had spoken to my doctor about cycling and other sport before I got pregnant (he’s a sporty type so encouraged me, telling me that I should try to keep my heart rate low (under 130bpm) so the baby didn’t have to compete for oxygen). I ended up cycling to several hospital appointments and never got told not to – they were a bit surprised at 37 weeks, but didn’t tell me I shouldn’t, especially as I was quick to point out I’d come the whole way on a cycle route.

Once I announced my pregnancy around 12 weeks several people mentioned my cycling and said things like “So you’ll be stopping cycling then?” I replied no: I was happy, my husband was happy, my doctor was happy and I’d modified my journey to lower the risks now it wasn’t just me I needed to worry about. The questioning continued throughout the whole time I was pregnant – friends, relations and colleagues all made it their business to tell me what they thought (that I was crazy and putting the child at risk). Mostly the wariness came from non-cyclists, and although a few who did cycle expressed their discomfort, more of them thought it was OK. 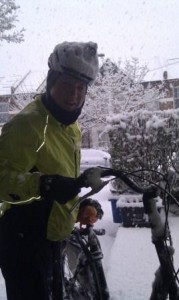 Sarah at 29 weeks, caught in a snow storm!

There were times in the autumn when the weather was dreadful and my risk assessment said that the train was safer, but I continued to cycle to work on my racer until about 27 weeks, including getting to work on a tube strike day when half my office didn’t make it in. I also used Boris Bikes regularly when I was using public transport. Around 27 weeks though it felt less fun, I was getting bigger and less stable and as it was December I decided maybe it was time to stop. Had it been summer, I probably would have kept going longer. I continued to cycle for short journeys around home – a trip to the shops, which was a 30 min walk plus carrying shopping home, was much easier on my bike! My Pilates class was an uncomfortable 45 minute walk each way, yet a 20 minute gentle pedal warm up and cool down.

Once I was pregnant I knew my racing bike probably wouldn’t last forever, so I started looking around for a suitable “Mummy bike” – something more upright and solid that I could use in pregnancy and then load the child onto later. A Dutch friend, who was one of the few who encouraged me to cycle – herself a mum to two lovely boys, she had cycled through her pregnancies (because “at home that’s what everyone does!”) – offered to sell me a spare bike they had. I tried it out one cold night in November and instantly felt this was to be my steed for the next few months if not years! Sturdy and almost unbreakable, this bike is a long way from my fragile, go fast in a straight line racing bike: it looks like a Boris Bike and feels like riding a tank. Heavy, but safe! It even got me home from Chiswick through the middle of the December snowstorm – a trip my racer never could have coped with.

So me and the bump loved the last few months of pregnancy cycling when the walk was longer than 10 minutes – helping me to continue with the freedom I’d always known as a cyclist. We even kept going past 40 weeks (baby eventually came 12 days late). I caused a stir with my NCT group by arriving to a coffee afternoon with helmet and yellow jacket: they were really shocked that I was cycling at all, let alone at the advanced stage of pregnancy. My arguments of comfort, my experience of cycling before pregnancy, how I didn’t use major roads and how in many countries it was normal all fell on deaf ears – they were still telling me how uncomfortable they were with the idea as we left and I was instructed not to fall off or get hit by anything on the way home (5 minutes away).

About a week later I was chatting to another mum-to-be, who revealed that she too had cycle commuted until about six months and had encountered similar opinions. She had a Brompton which she used later on like my Mummy bike, for short trips and carrying shopping. We both looked forward to being able to take our babies out cycling. A close friend who cycle-commutes asked my advice about cycling while pregnant – she now does a train / Boris Bike commute some days to scale down the number of miles.

As well as cycling, I continued to row (racing in a coxed four at 9 weeks and then retiring to my own single scull until 28 weeks) and did a weekly ‘regular’ dynamic Pilates class (not a specific pregnancy one). Part of me wanted to feel “normal” through my pregnancy and I also knew that keeping active was a good way of reducing various pregnancy ailments. 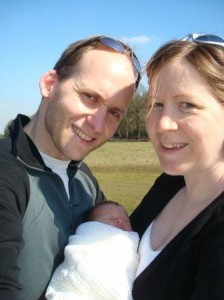 So my advice to anyone considering cycling in pregnancy is go for it! If you’re already a cyclist, then you might want to do as I did and change your ‘risk assessment’ by cycling at different times and following quieter routes than the ones you take normally. You should definitely talk to your doctor but don’t get put off by other people’s opinions. If you’ve never cycled before, as maybe pregnancy isn’t the time to start, but if you’re really keen, then start off in your local park at a quiet time. Have fun!

Sarah will be doing a follow up article later in the year about cycling with children – we’re looking forward to it already!