At the recent London Cycling Campaign 2010 Awards, Teddington Bike to Work Week 2010, was awarded the winning prize for Best Cycling Event.   The Bike to Work Week, now in its second year, took place back in June and was organised by SWELTRAC who coordinate the Teddington Travel to Work Network. It provided an opportunity for staff from 10 organisations in the Teddington area to get together to learn more about cycling and take advantage of free initiatives and offers. 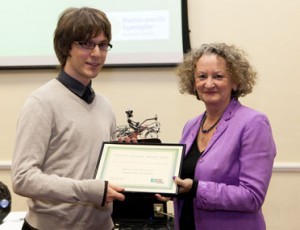 Nick Bailey from SWELTRAC, collected the award on behalf of the members, paying tribute to all of the businesses involved in the events and reinforcing the hope that this sort of initiative will continue to be supported by Local Authorities in future years. The judges stated that they were particularly pleased to see many businesses proactively working together to promote cycling.

The Teddington Travel to Work Network, established in September 2007, is a group of 14 local employers covering almost 4,000 staff who are working together to improve the range of travel options for their staff and to reduce the number of single occupancy car trips to and from Teddington. The organisations involved in the events were The National Physical Laboratory (NPL), Haymarket Media Group, LGC, The National Measurement Office (NMO), St Mary’s University College, Tearfund, NHS Richmond, Byrne Group, Pinewood  Group and Amey.