A Tube Map for Richmond

The idea of representing cycle routes like tube lines was developed by cyclists in Bristol and Bath. They show connections clearly by simplifying geography so are not meant for navigation but give an overall idea of the state of the network.

The most accessible routes are drawn in blue and then via cyan, yellow , orange to the most hostile in red. The call is “turn the map blue ! “. 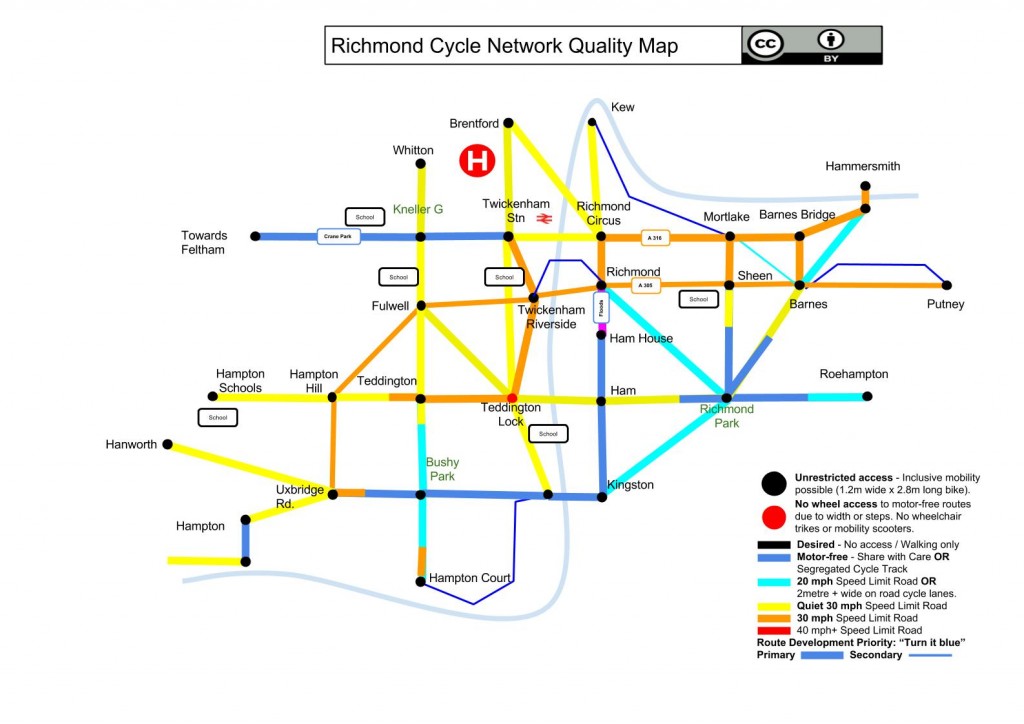 OK ish  (mostly thanks to Royal Parks ) apart from around Twickenham and Richmond-Mortlake but the network is only as good as its weakest link and some of the weaknesses have been glossed over in the above picture. From the collision rate shown in the LIP map Twickenham Station-Riverside should be Red  as should Upper Richmond Rd.

The A305 / A311 is the direct link  between  “Village Centres” and so will be used for cycling although it is hardly to be recommended to the inexperienced. I have used a slightly thinner line. The thinnest lines are for routes that avoid traffic at the expense of being very roundabout ; fine for recreational rides.

The “real” map corresponding to this is HERE  Again colours are for continuity not standard. The probably sub-standard A305/A311 is shown narrower. The Traffic Light symbols indicate crossing that are NOT present yet.

At a recent meeting with councillors there was acceptance that Richmond needs a long term plan for cycle routes and a willingness to look at these proposals. There was especial interest in Tube Map idea for waymarking.