On 22 May 2014 the whole of Greater London will go to the polls to elect our local councillors for the next 4 years. As anyone who has followed the work of RCC over the past 4 years since the last election campaign, you will have see how councillors have a significant influence on the safety and liveability of our borough’s streets and town centres.

London Cycling Campaign has set the 2014 local elections as a campaign priority and plans to ask every candidate in every ward across central, inner and outer London to support pro-cycling policies and measures. We have started to collate what the issues are at a ward level and LCC carried out a survey at the end of last year to identify what people felt was important in the ward they lived and cycled in, based on six policy themes.

Well the preliminary results are in from that survey and there was an overwhelming response rate, with replies from every ward in the borough. Have a look at the chart below for the results: 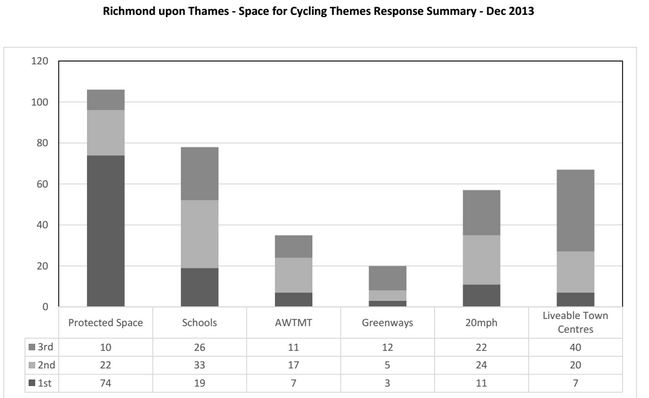 Across the borough, the same policies were identified as being most important:

We’ll report back more on the results and how you can get involved in targeting the candidates for your ward to help you select the person who will do the most for your area. LCC have set up a system that will allow you to email each candidate in your ward.

Many of the wards are determined on just a couple of votes, so it is really important you register to vote (deadline appears to be 14 April as registers updated once a month – you can register here or use Richmond council’s form. Richmond Council allows you to check online if you’re registered) and turn out on the day and share with all your friends and family who live in the borough and want it to be an even nicer and safer place to live and cycle in.

One interesting aside from the survey was the % commuters by bike statistics that LCC included. While it is encouraging to see an increase in commuting by bike between the 2001 and 2011 census periods (and Mortlake and Barnes Common leads the way not with nearly 9% commuting by bike), it is a shame to see that in Heathfield ward, the number cycling to work has fallen and is now the lowest in the borough, although South Richmond isn’t far behind. 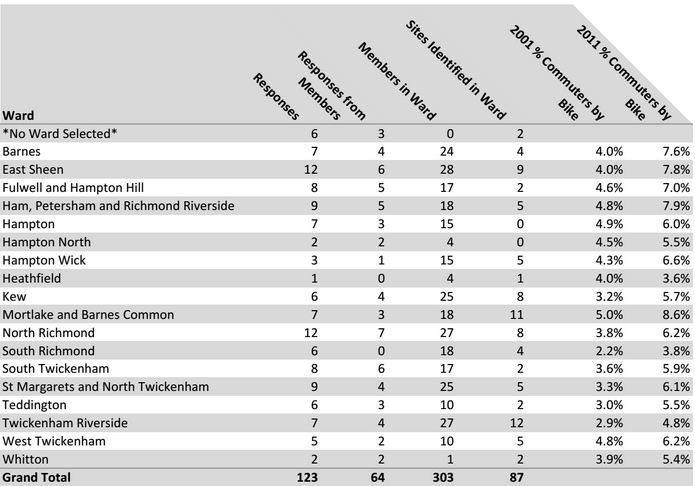